For this DVD release, “Dance on Fire” features a newly found pristine print of the “Unknown Soldier” from Bruce Botnick’s private files and a new director’s cut of “LA Woman”, finally presented as Ray Manzarek intended.

The special supplement section features a look at over one hundred rare collectibles along with some of The Doors’ personal artifacts. Fans will be delighted to see Ray Manzarek’s legendary student films, “Evergreen” and “Induction“, which reveal a rare glimpse of Jim Morrison during his pre-Doors UCLA days.

John Densmore provides the viewer with an emotional excerpt from his successful one-man play based on his best-selling book, “Riders On The Storm”.

Closing the supplement section is Robby Krieger performing a contemporary adaption of “The End” featuring a close-up look at his mesmerizing guitar skills. 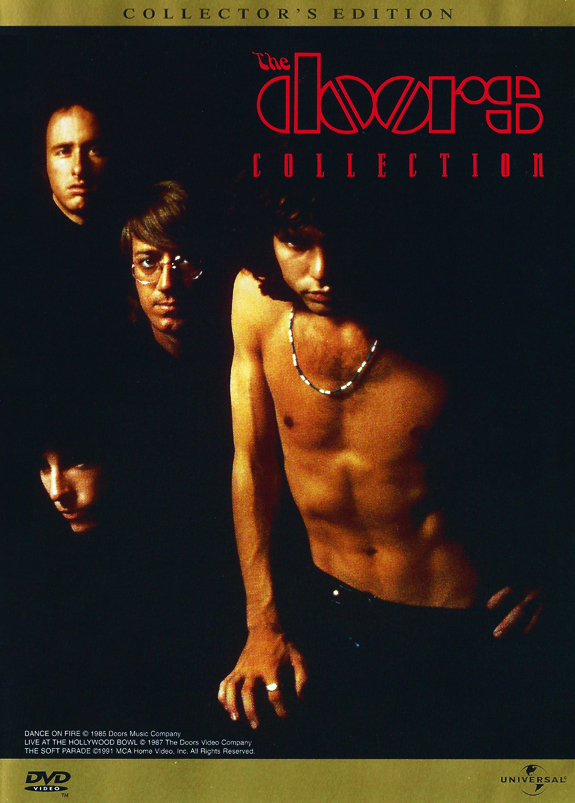 Although this is essentially a repackaging of three previously released VHS releases on DVD, there are enough extras included here to make it very worthwhile. With this release, we get to see the “director’s cut” of LA Woman, which means it includes the nudity that they were forced to cut out of the “Dance On Fire” release. In addition, we get to see Ray’s student films, an excerpt of John’s one act play and Robby playing a fusion version of The End (with Arthur Burrow on bass and Bruce Gary on drums). Also included is a montage of the 1969 Henry Diltz Venice Beach photos narrated by Henry. This was originally included on the “Best of The Doors” release. To me, the best part of this release is the audio commentary track, which allows you to listen to Ray, Robby and John talk and banter with each other as the videos play. For most of these extras, including the audio track, this is the only place they are available.