The Doors Soundstage Performances is a truly unique compilation of three completely different performances at three distinct stages in their career. Hailing from three diverse environments, Toronto, Denmark and New York City, the Doors appear in the springtime of their youth performing “The End” on a Toronto Soundstage in 1967; during their ascent on their only European tour in 1968, and again in maturity for public television on a soundstage in New York in 1969, where they design to give an interview, and a bearded Jim Morrison conducts his only on camera interview just a few short months after his arrest in Miami, Florida. The concept of the “Soundstage Performances” laid the way to assemble all three appearances on one DVD or home video. A majority of the material has never been seen before. Not only is it rare but it is startlingly great. Providing commentary are all three remaining Doors: Ray Manzarek, keyboards, John Densmore, percussion and Robby Krieger, guitar.

Even without an audience, the Doors mesmerize, playing for nothing but the cameras, Morrison still delivers electrifying performances, whether reciting poetry in Denmark preceding “Love Me Two Times” or getting it on during “The Soft Parade” – Jim Morrison’s charisma, beauty and brilliance shine during it all. 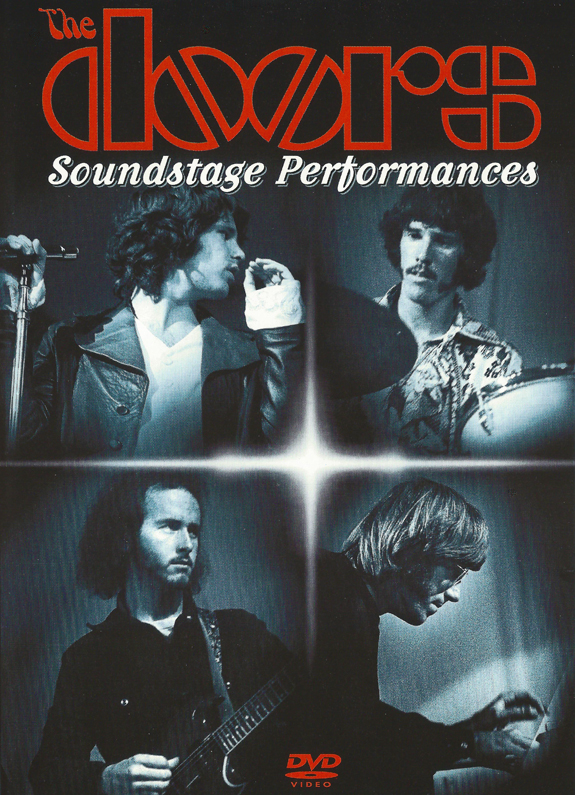 Help! If you know of a copy of the Critique show existing on 1″ or 2″ video tape, please contact us through the “Contact” page.

This release is made up of songs from three separate sets during three separate phases of The Doors’ career, plus new interviews with the remaining Doors filmed in 2002.

The first set is an amazing version of “The End” from a Canadian show called “Rock Scene”. Filmed in brilliant color with a lot of great closeups and perfect sound, this might be the gem of this release. If you ever wondered what it was like to see The Doors live at the Whisky in 1966, this is probably as close as you will ever get. The “Oedipal” section of “The End” is edited out. Hopefully some day we’ll find the unedited version.

The second set of songs is from the 1968 Danish Television special. Filmed days after Jim was released from the hospital following the incident in Amsterdam, Jim sits on a stool for a portion of this 30 minute performance, but musically and vocally this performance is right on the mark.

The final five songs are from a 1969 PBS show called “Critique“. Filmed during the Miami trial, The Doors play songs from The Soft Parade, plus a few of their favorites. This is probably one of my favorite performances when it comes to Ray’s keyboard playing. The camera was in a perfect spot to film Ray’s hands on both the Fender Rhodes piano bass and the Vox Continental, and the bass and Vox’s sound is captured perfectly on this recording. Now, the bad news. Although the master tape of the Critique show is most likely lost (if you know where it is, please contact us on Ray’s social media pages!), it seems that an inferior copy was used for this release. It has “tracking” issues throughout the performance. Let’s hope this can be released someday in better quality. In addition to the music, the Critique interview with Richard Goldstein is also included. Here you get to hear the band answer questions about their music, plus hear Jim absolutely nail what the future of music might look like.

Although the material itself is spectacular, the bonus material is not to be missed. It consists of a half hour of newly recorded video interviews of Ray, Robby, John and Danny Sugerman. Although they placed some of this commentary within the main program in between the songs, the rest of only accessible through the DVD menu. You get to see Ray, Robby and John discussing each of the performances in detail, along with other topics. The strange part about it is that it’s almost hidden on the DVD. Well worth tracking down this DVD.

The last item on the DVD is a photo gallery. It contains about 100 photos, in a photo album-like display. Regrettably, you can’t enlarge the photos so there really isn’t much to see.