Ray and Robby’s first prime-time television appearance of their comeback occurs on January 16, 2003 on The Tonight Show with Jay Leno. Although Jay refers to the band as The Doors, soon after they would start calling themselves “The Doors of the 21st Century”, or just “D21C”.

Jay’s introduction: “My next guests are one of the greatest rock and roll bands ever. I saw them my senior year in high school, actually. It’s true. Now after thirty years they’ve reunited and are currently on tour. They include founding members Ray Manzarek and Robby Krieger, as well as Ian Astbury and Stewart Copeland. Ladies and gentlemen, please welcome The Doors.”

The band, which also features Angelo Barbera on bass, performs a great, fast tempo version of “Light My Fire” which includes short solos by both Ray and Robby. The band would also appear on “The Late  Late Show” with Craig Kilborn and “Last Call” with Carson Daly. 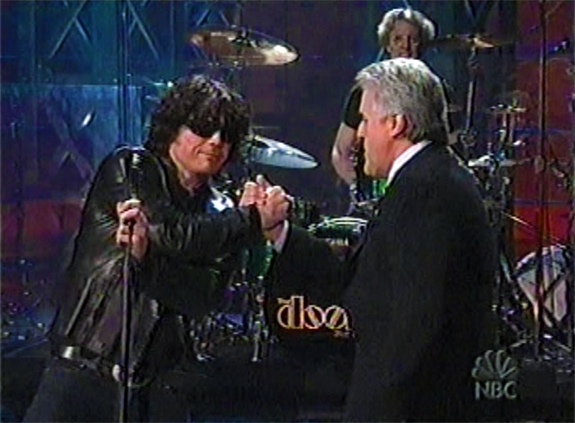