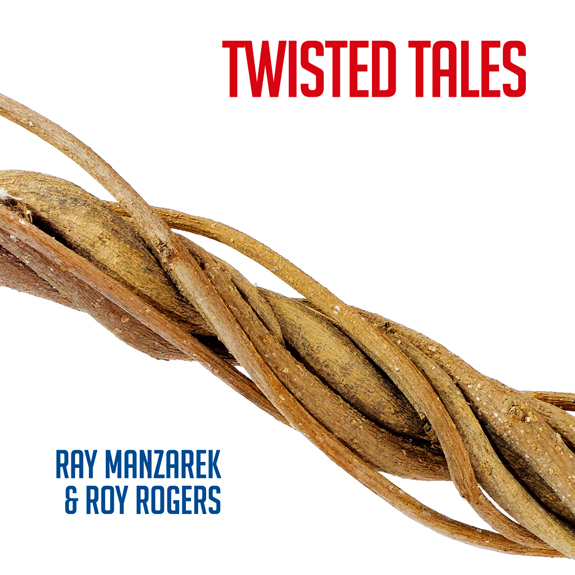 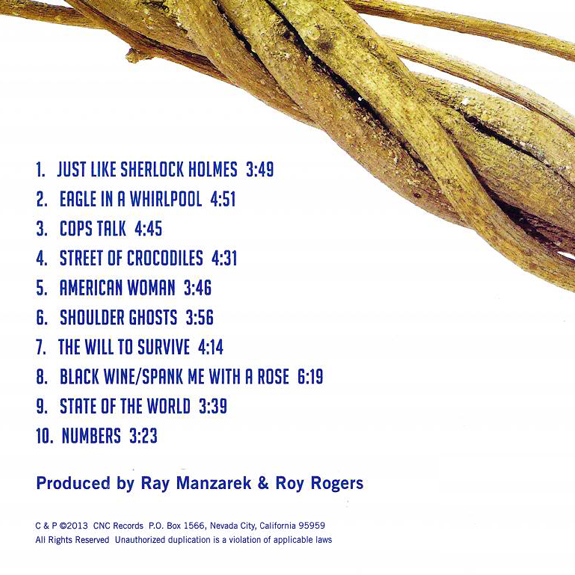 1.Just Like Sherlock Holmes
2.Eagle In The Whirlpool
3.Cops Talk
4.Street of Crocadiles
5.American Woman
6.Shoulder Ghosts
7.The Will To Survive
8.Black Wine/Spank Me With A Rose
9.State Of The World
10.Numbers
11.Closing Time (Hidden Track)

This release from the “Manzarek-Rogers Band” contains another great collection of blues, rock and jazz numbers. Just like their first release “Translucent Blues”, this is a mix of newly written material and remakes of previously unreleased songs of Ray’s.

“Just Like Sherlock Holmes”, “Cops Talk”, “Street of Crocodiles” and “American Woman” were originally written during Ray’s collaboration with Jim Carroll in the mid-eighties. As mentioned in the “Translucent Blues” notes, Ray and Jim Carroll went into the studio in 1986 and recorded a set of these songs, and others existed only on demo tapes that have remained unreleased to this day. Ray had also been rehearsing all of these songs with Robby Krieger in the mid-2000s and even went into the studio and recorded a few demos with Ian Astbury on vocals. D21C performed “Cops Talk” live a few times as well as the Manzarek/Carroll tune “American Express”. Ray obviously loved these tunes and wanted them to be released. He was very excited to finally get them out to the fans on “Twisted Tales”.

There are three Michael McClure/Ray Manzarek compositions on this release. The first, “Eagle In The Whirlpool” was one of Ray’s favorite McClure poems. Not only was this rock version included on Twisted Tales, but a spoken word version with McClure was featured on the “Piano Poems” release in 2012. This is another that was rehearsed with Robby Krieger in the mid-2000s with some lucky D21C fans actually getting to hear it performed live with Ian Astbury on vocals. The other two songs based on McClure lyrics are “Black Wine/Spank Me With A Rose” and “Numbers”, neither of which had been released previously.

The album is rounded out with three great Roy Rogers originals, “Shoulder Ghosts”, “The Will to Survive” and “State of the World”.

At the end of the album, there is a “hidden track” called “Closing Time” hidden after the song “Numbers”. It is basically a humorous skit based on what happens at closing time at a cocktail lounge or piano bar. They recorded this while goofing around in the studio. This skit was almost NOT included on the release. Ray wasn’t quite sure if it should be included or not. Here’s a quick story on how the decision was made. We were all at a hotel in Illinois the day before the “Lockport Logjam” concert, had just finished dinner (and a few beverages) and were talking about the album. Ray said he wasn’t sure he wanted the skit included or not. Roy said he really liked it and wanted it included. Ray said, “Well Dave, looks like you have the deciding vote.” I immediately said “I love it. Definitely include it!”. Ray leans back, takes a drink from his glass of wine and says, “I guess I lose again. Put it on the album!”.