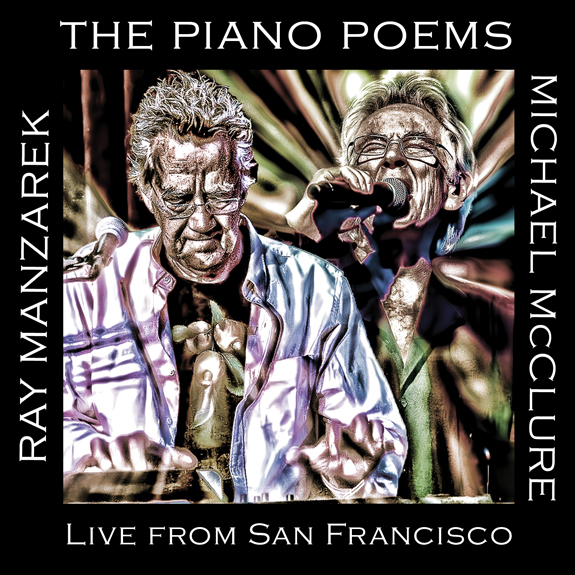 Available in iTunes and amazon.com. 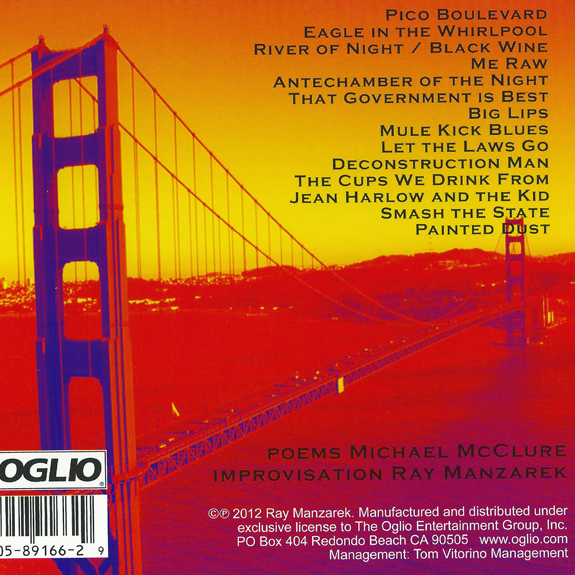 1.Pico Boulevard
2.Eagle in the Whirlpool
3.River of Night / Black Wine
4.Me Raw
5.Antechamber of the Night
6.That Government is Best
7.Big Lips
8.Mule Kick Blues
9.Let the Laws Go
10.Deconstruction Man
11.The Cups We Drink From
12.Jean Harlow and the Kid
13.Smash the State
14.Painted Dust

On a cold, foggy night in San Francisco after a great Japanese meal, Ray Manzarek and I stepped onto the stage and there were sparks of consciousness – the stage was on fire with poems and piano improvisations. The symbiosis and the synergy made lights. Then Larry Kassin stepped up to join us with his jazz flute and Lou Judson was recording.

This is a live album with its heart still beating – no tricks, gimmicks, or second takes. We are bringing together my poetry and Ray’s improvisations that shape my word-sounds into richer meanings: Piano Poems.

That’s the edge we’re whetting on this album.

I’m in the recording studio with Michael McClure. We’re mixing “Live In San Francisco.” New and older poems from a live performance at an old wooden church last year. Great acoustics, Steinway grand. Excellent show. Larry Kassen joins us on flute. Should be out later this year. Here are the pieces: “Pico Boulevard”, “Osprey”, “Let The Laws Go”, Let Me Be Raw”, “Eagle In The Whirlpool”, “Mule Kick Blues”, “Black Wine”, “River Of Night”, “Man On The Cross/Pop Children”, “Antechamber Of The Night”, “Deconstruction Man”