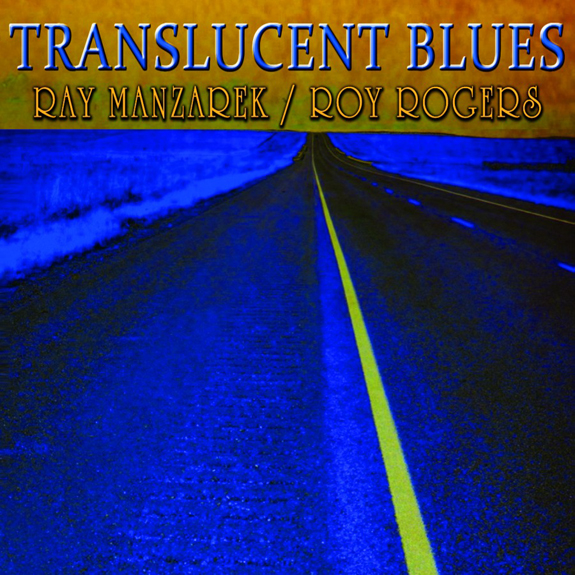 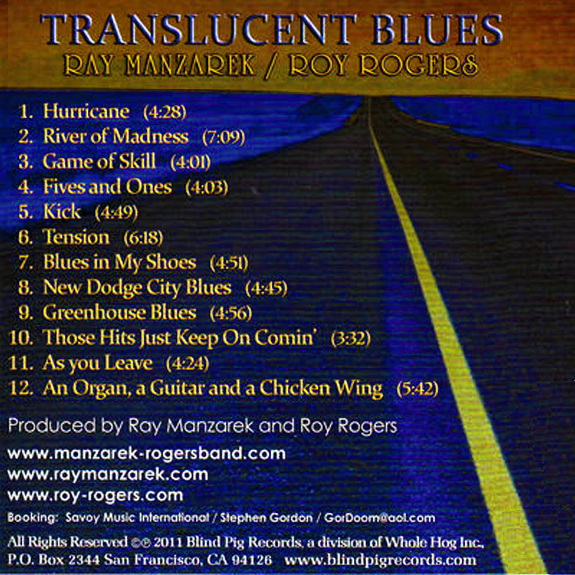 1.Hurricane
2.River of Madness
3.Game of Skill
4.Fives and Ones
5.Kick
6.Tension
7.Blues In My Shoes
8.New Dodge City Blues
9.Greenhouse Blues
10.Those Hits Just Keep On Comin’
11.As You Leave
12.An Organ, a Guitar and a Chicken Wing

This is the first release of the “Manzarek-Rogers Band” and contains a great cross-section of blues, rock and instrumentals. Ray and Roy alternate taking lead vocals with Ray singing lead on five tunes and Roy on five. The remaining two tunes are instrumentals, one written by Ray and one by Roy. The songs themselves are a mix of new tunes as well as some of Ray’s favorites from the past. Many of the songs have great stories behind their creation as well.

“Hurricane” and “Tension” are remakes of two unreleased tunes from the ’80s collaboration of Ray Manzarek and author/poet/punk musician Jim Carroll. In 1986 Ray and Jim went into the studio and recorded these and other tunes, and they have remained unreleased for almost 30 years. Ray decided to rework two of the tunes and include them in this release. Ray would rework an additional four tunes from the Manzarek/Carroll sessions for the posthumously released “Twisted Tales”.

The song “River of Madness” was a true collaboration based on an idea and one verse from Warren Zevon (see “Extras” for copy of the original email from Warren). Sadly, Warren passed away before the song could be completed and Ray asked a few more friends and poets for help in finishing the song. The lyrics were completed through correspondence and phone calls over the course of a few months with Roy Rogers coming up with the music. Although they didn’t make it into the final version, Michael C. Ford’s verses are pure genius. If I can get permission from Michael, I hope to show some to you. Michael also contributed the lyrics to the song “Greenhouse Blues”.

“Game Of Skill” was one of Ray’s favorites from his days in the band “Nite City”. It was originally released on the “Nite City” LP in 1977. Click here to see the official “Game of Skill” video that we created for this song. It contains Ray and Roy discussing the song along with a performance shot live in Minneapolis.

“Kick” is a slow, bluesy song with lyrics by poet Michael McClure. It’s very different than any other track on this release, verging on spoken word. Great lyrics spoken by an old blues man.

“New Dodge City Blues” is a remake from Ray’s 1994 collaboration with Scott Richardson, “Revelation Blues”. This is another one that Ray really enjoyed playing live. Click here for a live version filmed in Minneapolis.