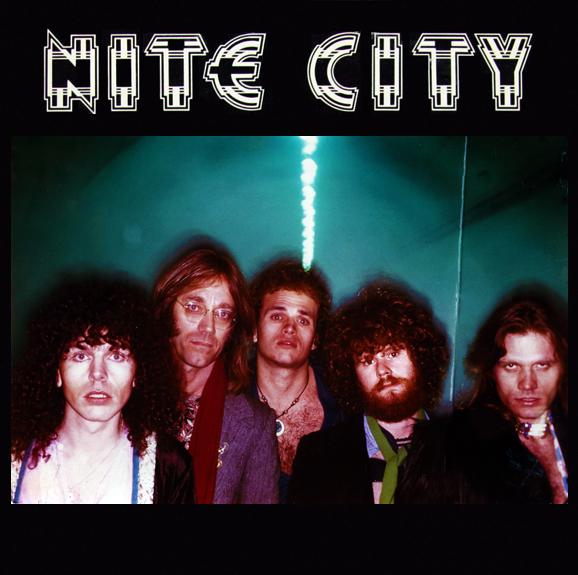 Currently out of print and not available. 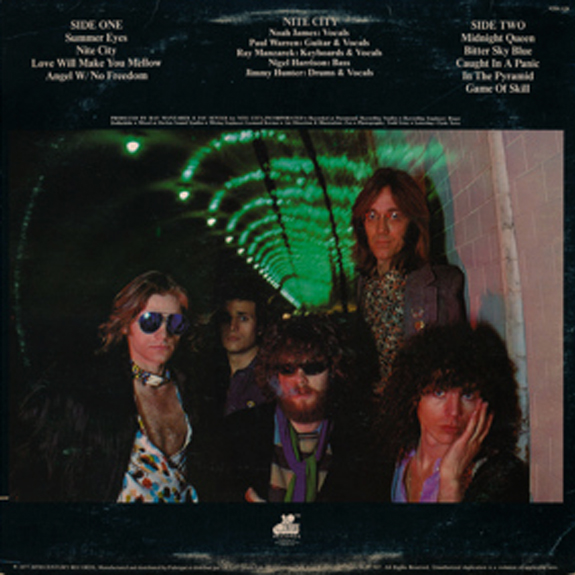 Nite City is the answer to Ray Manzarek’s question: “What do you do after The Doors?” It would not be unfair to say The Doors are the parent group to Nite City, but it would be more accurate if you said they were their bastard son. Manzarek founded The Doors in 1966 and he put them to rest when he left the band, theorizing there could be no Doors without their original singer.

In 1976, ten years later, still hungry for the unknown and sacred, Manzarek founded Nite City, choosing once again a lead singer with whom he saw eye to eye. Noah James became Manzarek’s new voice and Manzarek in turn provided Noah a bizarre soundtrack on which to overdub lyrics. Together they took an unspoken oath to create a new musical expression for an old topic: Truth. With all of it’s beauty and pain, they were dedicated to be its vehicle into he endless night. And whoever else they took into into the fold would have to share in that pursuit.

Nigel Harrison was already in, three down and two to go. Slowly Paul Warren and Jimmy “Mad Dog” Hunter followed. The story of the band’s formation is told elsewhere in this kit. Suffice to say it was a trial of stamina. More than a few dropped out along the way. Noah, Ray, Jimmy, Nigel and Paul. These are the survivors.

In the studio you could sense it. The five members of Nite City hunched over the space-age control board, ears straining to catch any minute error in the play-back. The fresh music poured out of the studio monitors as each individual silently argued with the musical reality that confronted him. So bent were they on perfecting the final product. Yet painfully aware of the danger over-scrutinization can present. Passion can be reduced to sterility with the flick of a switch. So fine is the line dividing musical excellence and emotional impact. The two must gel and compliment and the compromises required are as painful as they are, ultimately, rewarding. Everyone has a different standard for perfection. It’s usually during this stage of recording, the final mix, when standards conflicts and arguments erupt. Not within Nite City. Now, few words are exchanged. Knobs were turned, tapes buzzed their rewind, and the music exploded. Eyes clamped shut. Ears perked. The energy was almost tangible. The air in the cotrol booth was as electric as the wires underneath the console. The five members of Nite City were finishing up their element, each one’s mind locked into the cosmic wall socket of the O-Mind. The essence from which Nite City draws it’s output.

The music played back was so loud you could hear every nuance. The effect was staggering, the perfect blend of precision and abandon; passion and aggression. The mark they had aimed for when the first entered the studio. Bulls-eye.

Nite City concerns itself with reality, not all of it kind. With harmony and beauty they claw at its cruelty and ugliness. They were born from a phoenix of frustration and dreams. They were also born in Los Angeles. Nite City is a metropolitan American band, but more than that they are a rock and roll band from LA. And they reflect their environment. America in the seventies, America in the streets. Nite City are about living with emotions strangling you. Ruthlessly they expose the seamy underbelly of city life as both voyeurs and products of that scene. Their music brims with anguish and defeat; desperation and survival. But also pictured on the dramatic landscape of Nite City is something more, a reassurance, beyond the desolation and tragedy, a joyous echoing of hope.