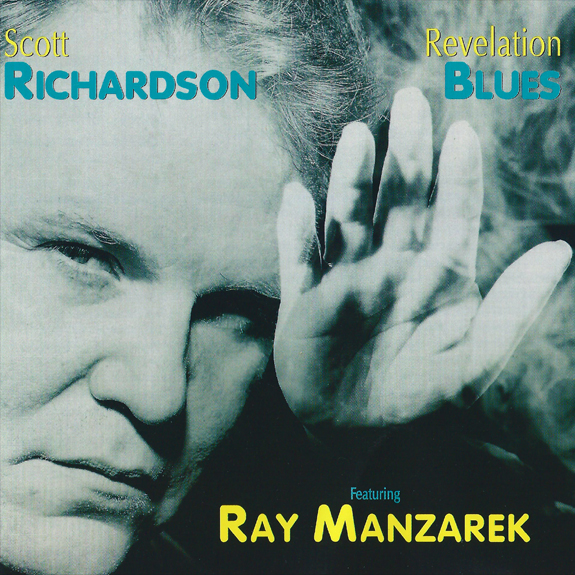 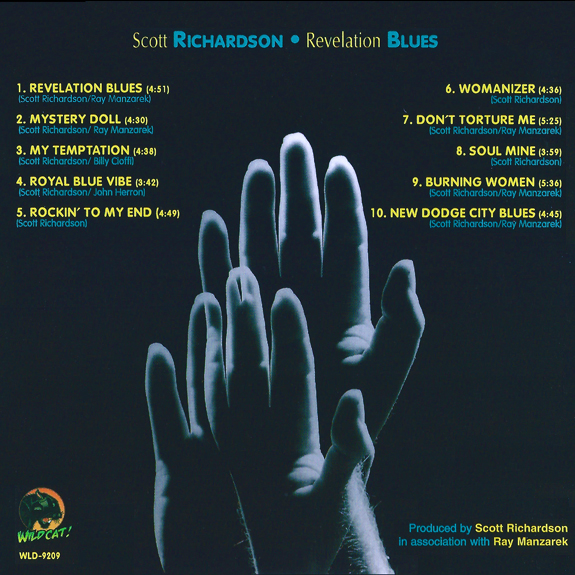 In the late ’80s, Ray got together with Scott Richardson for a brief collaboration that resulted in this blues-rock release. The songs on this CD come from two separate recording sessions, the first from a 1988 session recorded at Radio Tokyo Studios in Venice, California. Those songs (Revelation Blues, Mystery Doll, Burning Women and New Dodge City Blues) were all co-written by Ray Manzarek and Scott Richardson and feature Ray on keyboard. The second recording session in 1989 was recorded at Mad Dog Studios in Venice and consist of Richardson compositions with the exception of “Don’t Torture Me” on which Ray came in to lay down a keyboard track. Ray also later contributed to Scott’s 1992 release, “Tornado Souvenirs”. One of Ray’s favorite songs from Revelation Blues was “New Dodge City Blues”. He ended up recording a new version of this song on the 2011 Manzarek-Rogers release “Translucent Blues”.

The ten songs on this album are like a soundtrack to a mythic Sam Peckinpah film. They go beyond every attempt to categorize and currie favor with no one. The basic plot is two psychedelic visionaries, Scott Richardson and Ray Manzarek, leading a “Wild Bunch” of gun slinging musicians on a supercharged odyssey though the consciousness expanding psychedelic blues. Just as Peckinpah re-invented the Western genre, Scott Richardson has taken his and Ray Manzarek’s “Sixties” root influences and turned them inside out to reveal entirely new textures. There are L.A. echoes from The Doors in Manzarek’s signature piano playing and acid tinged guitar tones from Richardson’s Michigan based band, SRC. The Chicago blues masters who influenced them both also weigh in through Hurricane Jake’s high octane harp and Richardson’s mannish vocals. The resulting music is so dangerous and insightful sparks fly out of the speakers. The themes of spiritual transcendence and sexual politics are so thoroughly rendered they challenge and change previously held perceptions. Very rarely does art this powerful get a chance to be heard and seen. Four of these tracks were cut in 1988. Five of them were cut in 1989. All nine remained a mere rumor until Wildcat Records took the extraordinary step of helping Richardson finish the project and prepare them for release. There is one new addition, the erotic duet Scott cut with his wife Rita, in Emporia, Kansas of all places. From the opening bars of “Revelation Blues” to the final psychic confrontation of “New Dodge City Blues” you will journey through the heart and soul of what’s been missing from the contemporary music scene for a long time, the guts to act your age and not to play down to any demographic consideration. That kind of courage gives me hope we don’t have to wait as long for another album from Scott Richardson & his “Bunch”. – Bill Frank, Los Angeles, 1994.