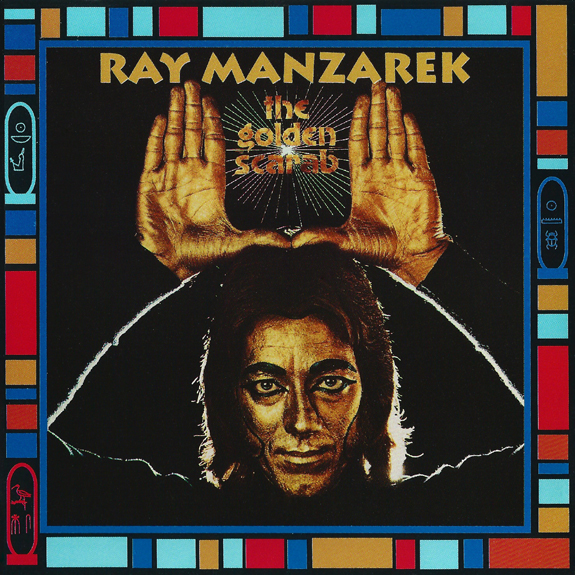 While everyone knows Ray Manzarek as the keyboard player, and founding member of The Doors, not many know about his extensive career following his time with The Doors. This is the first in a series of articles focusing on Ray’s “post-Doors” solo projects and collaborations.

This first installment is on Ray’s first solo album, 1974’s “The Golden Scarab”.

When The Doors decided to go their separate ways in January of 1973, Ray, Robby and John were all eager to get out on their own and prove themselves as solo artists. While Robby and John decided to stick together and form a new band called the “Butts Band”, the only mention of Ray’s plans was that he had gone back to Los Angeles to start his solo career.

The first inklings of what Ray was up to came in mid-1973 when the music industry’s biggest magazines and trade publications suddenly had stories mentioning that Ray was back in LA with a “to be announced” guitarist, bassist and drummer and working on new material for an upcoming solo album.

All of this press was due to the behind-the-scenes work of Ray’s new manager, a hard working nineteen-year-old named Danny Sugerman. Danny created a public relations firm called “Flackery Productions” and dedicated most of his time promoting Ray’s solo career. Years earlier, a young Danny had become a part of The Doors scene when Jim Morrison gave him a job answering Doors fan-mail.

To make sure his album was done right, Ray recruited Doors studio-whiz Bruce Botnick to produce it at Sunset Sound studios. The bass player for Ray’s new project was none other than Jerry Scheff, who had worked with Ray on The Doors’ last album “LA Woman”. Ray then brought in jazz drummer Tony Williams and guitarist Larry Carlton to round out the foursome. It was then announced that after completing the album, they would hit the road and tour.

Ray’s new album, called “The Golden Scarab”, was an Egyptian-themed concept album that he described as being inspired by acid, and seven years of being a Door. “The Golden Scarab tells the story of a psychic journey. A guy waiting for the Messiah; waiting for someone to show him the way. But in the end he finds he can only do it himself. Take life as it is. Don’t judge it. Enjoy it. It’s life! Musically it plugs back into the music of the first two Doors albums. It’s rock and roll plus. Plus Chicago blues, Russian classical, African rhythms, Brazilian rhythms and even Oriental music. But with an aggressive hard-rock foundation”. Some of these Manzarek-penned tunes had been rehearsed with Robby and John before the Doors broke up for good. Click here for track listing and liner notes.

Although Ray had originally envisioned that the band would work on the new material for a few weeks and then attempt to record, he was shocked at how fast things came together. After three short days of working in the studio, they were ready to record. One and a half weeks later, the album was in the can. “It was incredible,” Ray recalled, “some of the best music I’ve ever made and it only took three weeks!”

Once overdubbing and mixing of the album was complete, Ray and Danny Sugerman flew out to New York to shop the album to record label executives. In February of 1974, Ray signed a two-album deal with Mercury Records. 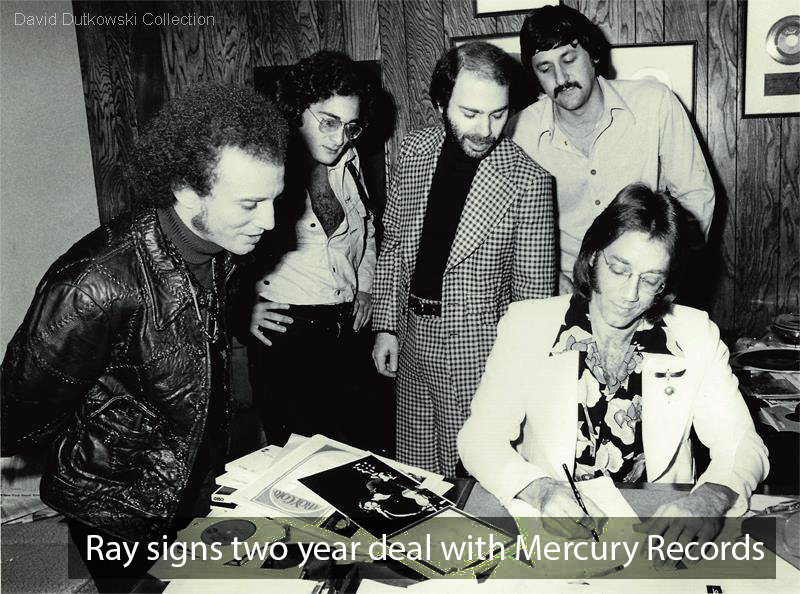 Through a heavy promotional campaign by Danny Sugerman, the album received very positive press through mainstream media outlets such as Downbeat, Crawdaddy, Rolling Stone, the LA Times, Creem, The Village Voice and Cashbox. The album “The Golden Scarab” was officially released on March 28, 1974.

The plan all along had been to put on a full-fledged tour to support Ray’s new album. The only issue was that Jerry Scheff, Larry Carlton and Tony Williams had other commitments and were unable to tour. At that point, Ray decided to go out and recruit an all new set of musicians specifically to tour. The group Ray brought together was top-notch. It included Dave Ferguson on guitar, Tim Downs on drums, Jerry Manfredi on bass, and Steve Forman on percussion. To get ready for the tour, Ray rented a studio in Los Angeles for two weeks where the band rehearsed and learned the material. At that point they went out on the road on an extensive tour of the United States. 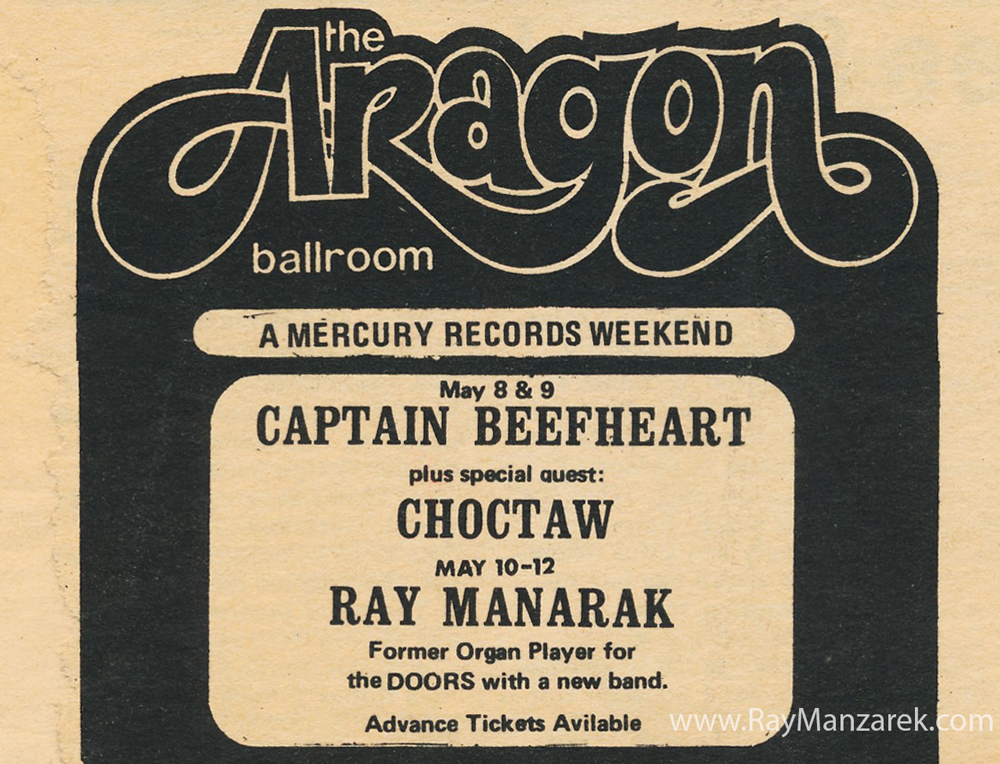 Ray and his new band headlined clubs across the United States including “The Quiet Knight” in Chicago and “Max’s Kansas City” in New York. During the tour, four FM radio stations taped the live performances for later broadcast. The stations included KZEW in Dallas, WRAS in Atlanta, WXRT in Chicago and WLIR in Long Island (**Note: As of the writing of this article, only one of these recordings has surfaced, the WLIR show. **)

The live shows were reviewed very positively with Ray being credited as stepping out from the shadow of Jim Morrison and showing his musical chops. Many of the trade publications talked enthusiastically about the live performances and Ray’s future as a solo artist. The tour wrapped up with a sold-out gig at the Whisky a Go Go in Los Angeles, the place where it all started for Ray and The Doors. The first tour was so successful that a second tour was immediately scheduled for July and August of 1974.

Following the completion of the second leg of the tour, the promotion for “The Golden Scarab” was complete. Ray was anxious to get back into the studio and start working on his second solo album for Mercury. In our next article, we will explore the creation of 1975’s “The Whole Thing Started with Rock and Roll, Now It’s Out of Control”.

Now let’s get the word out on this great chapter in Ray’s history! If you could, please use the below icons to share on your social networks and get this out to as many Ray fans as possible. Also.. if you, or someone you know, toured or recorded with Ray in the ’70s or ’80s, please contact us through Ray’s social media. We would love to talk to you! 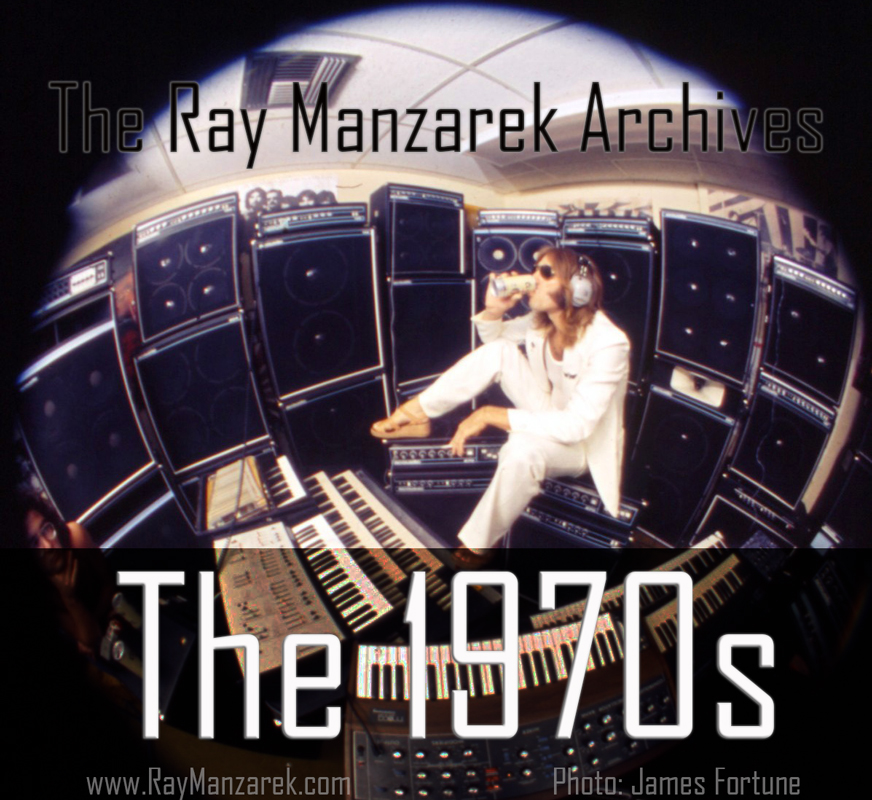 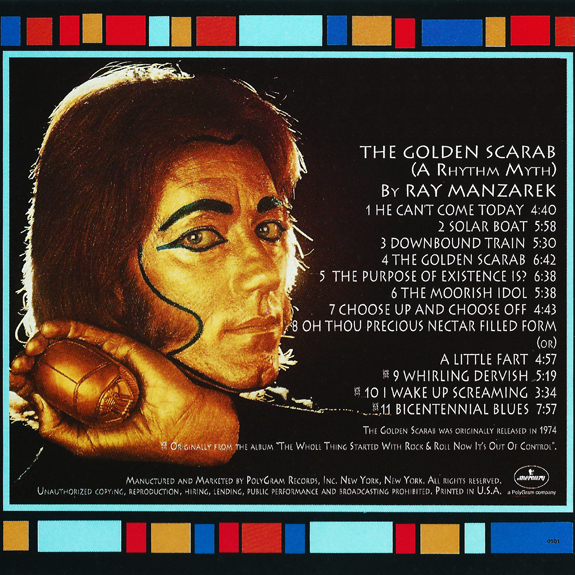 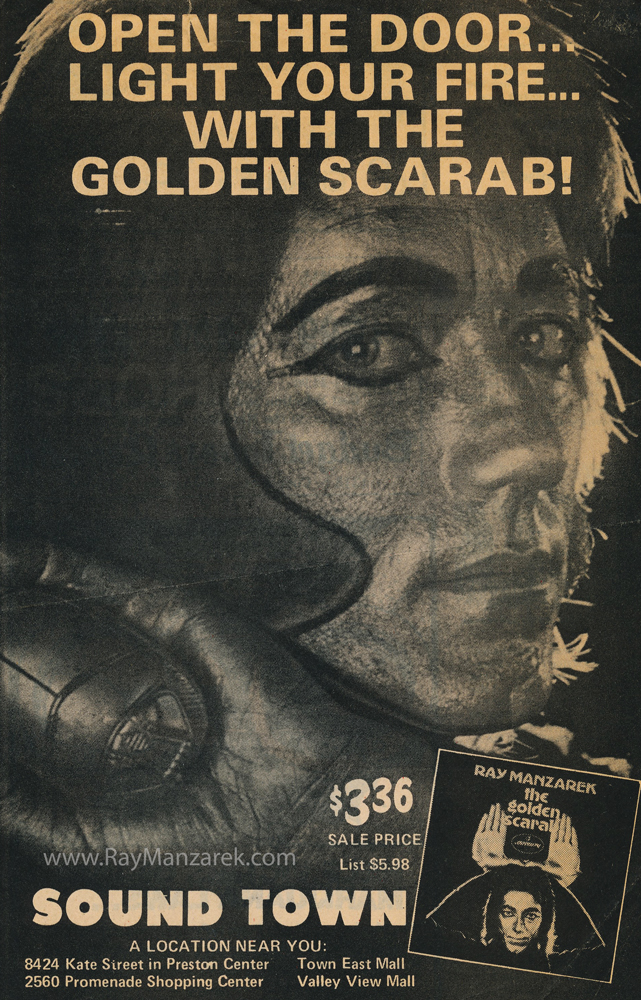 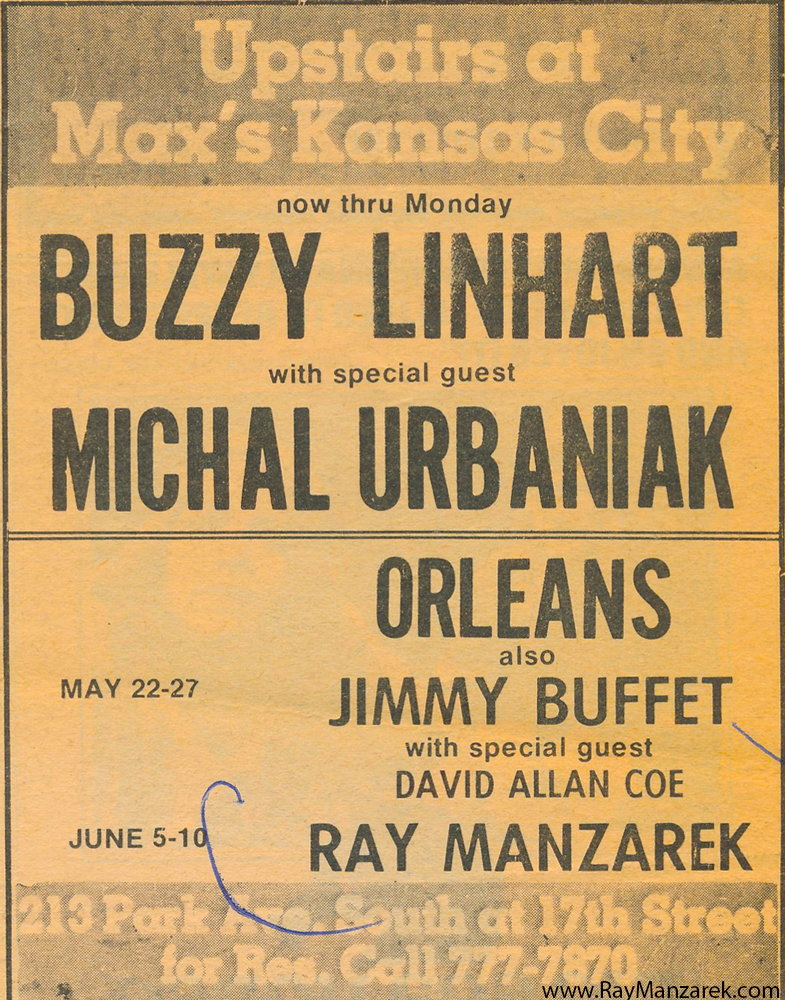 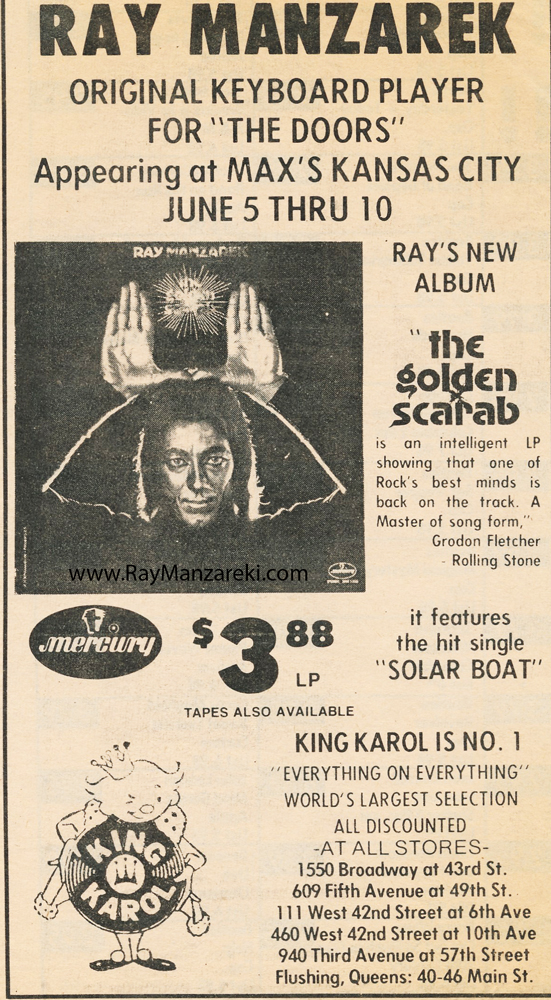 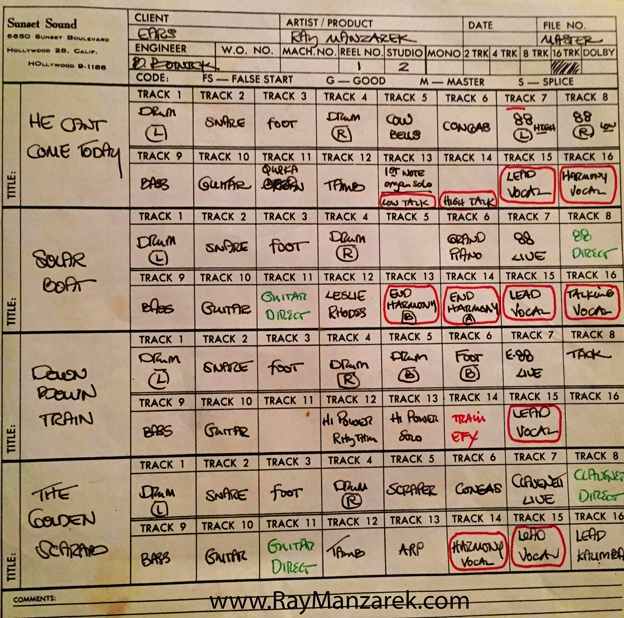 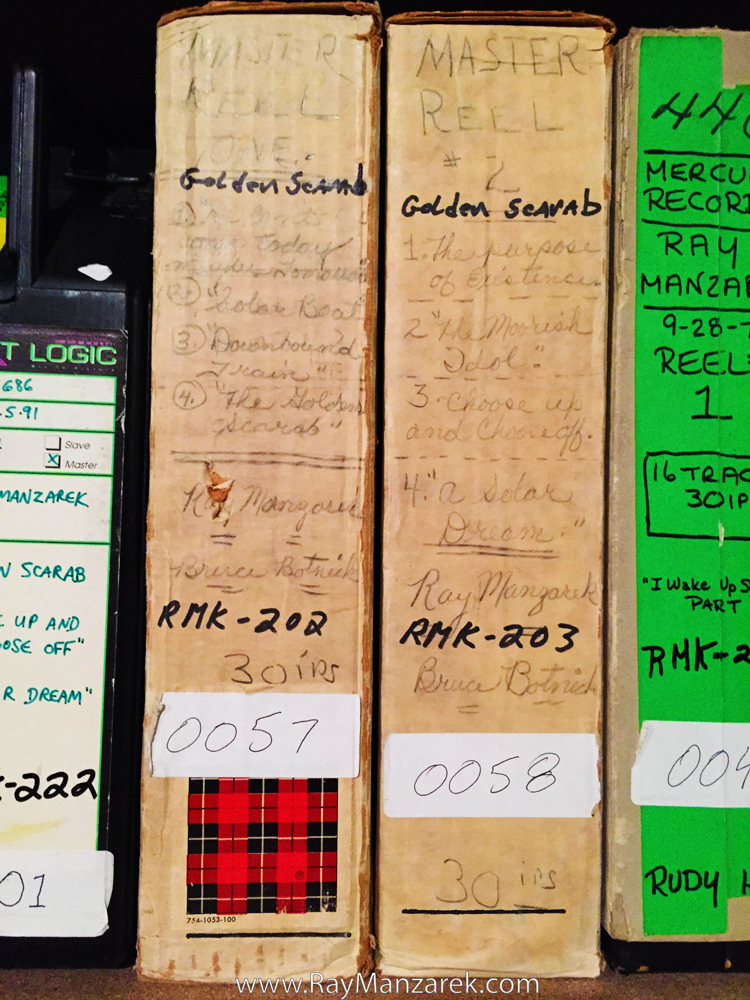