This gem of a film was created in 1965 after The Doors were released from their contract with Columbia Records, but before Jac Holzman signed them to Elektra. The Doors were out of work and in desperate need of cash. A friend of theirs hooked them up with a quick money project, to provide the instrumental score for a customer service training film that would be sent to Ford dealerships. The band was to get paid $200 for a day’s work in the studio.

In the studio Ray, Robby and John provided the instrumental soundtrack, while Jim added in some sound effects and additional percussion. The music itself is obviously Doors music as you can pick out Ray’s Vox Continental and Robby’s guitar style almost instantly. Much of it is mixed into the background though, so as to not distract from the film’s dialog and message. The Doors do get a chance to jam during the end credits, adding in a rocking instrumental that some have compared to the future Doors song “I Looked At You”.

The film itself goes over selling and customer service techniques and uses humor and stereotypes of customers to get the point across. The production value of his film is much more than you would ever expect from a training film with well written dialog, well built sets and expert camera work. They even went so far as hiring actor Frank Nelson as narrator. Also interesting is some of the “non-PC” humor aimed at the 1960s male workforce that you would never get away with today. The ending is especially good, showing how “good service selling” at work leads to a much better home life.

Until the film was unearthed at the UCLA vaults in 2002, it was considered somewhat of a “holy grail” and there was quite a bit of mystery behind what this film really was. When Ray discussed it, he had always said that the band played the soundtrack live as the film was played, but after seeing it agreed that there was obviously some editing involved. He then surmised that they played live to each scene a few times and things were edited together later. That also explains one of Ray’s other early comments about the film; that he first played the “Catacombs, Nursery Bones” music from what would become “The Soft Parade” in this film. He actually recognized music in the film that he played it right after that (the “Wrong Diagnosis” scene), but the music he remembers playing wasn’t included.

The film can now be seen by all fans, as it was released on the 2014 Doors DVD, R-Evolution. 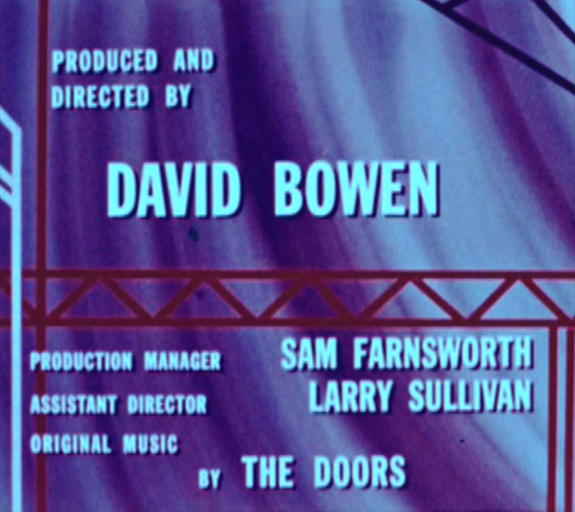