By the end of the sixties, The Doors had found themselves at the forefront of a movement that consisted of a generation of discontents. Operating against a backdrop of the Vietnam War and of social unrest and change in the USA, The Doors were hip, dangerous and anti-establishment. Jim Morrison and the band were on the radar of ‘authority’ who seemed to be just waiting for transgressions upon which they could pounce. This was to come to fruition at an explosive gig in Miami that has subsequently passed into folklore. Pushing the audience and the police to their limits, Jim was eventually arrested on various charges including incitement and indecent exposure. Unable to tour following the Miami incident, The Doors went into the studio to start recording what would be the last album to feature Jim Morrison: L.A. Woman.

They assembled in the fall of 1970 at Sunset Sound Studio in L.A. with engineer Bruce Botnick and producer Paul Rothschild to run through the songs for the album. Rothschild, who has produced all five previous Doors albums, could hear nothing he wanted to produce, announced that he was quitting and walked out. The band was stunned, but they decided to continue without Rothschild and co-produce the album with Botnick.

Botnick adopted a more spontaneous and live approach, including leaving Sunset Sound and recording the album in The Doors’ rehearsal and office space on Santa Monica Boulevard. The band responded to this new-found freedom and produced some of their best work – quickly – rarely exceeding more than two full takes on each song. It took four days to record the album.

Soon after they started the mix sessions Jim Morrison announced that he was leaving to go to Paris to meet up with his girlfriend Pam Courson and to take a break. On July 3rd, within 6 months of moving to Paris, Jim Morrison died. Cause: Unknown.

“L.A. Woman” reached number 9 on the Billboard Chart. The song “L.A. Woman”, the centerpiece to the album, is a masterpiece. There were two hit singles: “Love Her Madly” and “Riders On The Storm”. L.A. Woman is considered by many as one of The Doors’ finest achievements.

Featuring exclusive interviews with band members Ray Manzarek, John Densmore and Robby Krieger, plus Elektra Records founder Jac Holzman, their manager at the time Bill Siddons, and their closest colleagues and collaborators – along with exclusive performances, archival footage and examination of the original multi-track recording tapes with Producer Bruce Botnick – this film tells the amazing story of this landmark album by one of the most influential bands on the planet 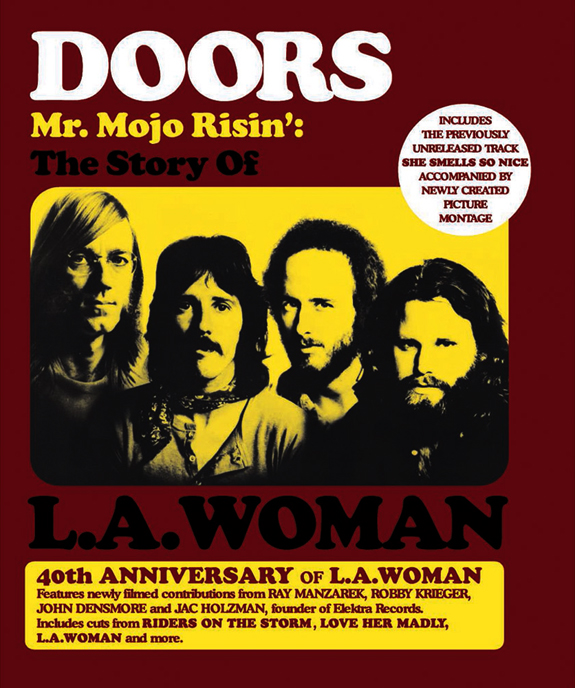 This DVD, along with “Classic Albums: The Doors” is something I would recommend to every fan of the band. In this DVD you get to hear again from The Doors, Jac Holzman, Bruce Botnick, Bill Siddons, Michael McClure and Jim Ladd talking about the making of each song from the LA Woman album. You also get to hear from Jim’s friend Frank Lisciandro and see many of Frank’s great photos. Just like the Classic Albums DVD, the highlights for me are Ray, Robby and John playing the songs for us as they talk through how they developed, plus Bruce sitting at his console isolating Jim’s vocals along with the other instruments.

With this release we also get to hear a new Doors song, “She Smells So Nice” which isn’t so much a new song as it is a jam, recorded during the LA Woman sessions.

The DVD ends with Ray making this statement, “The ancient Egyptians used to say that if you say a man’s name, he is alive. So I take this opportunity to say, ‘Jim Morrison’. This line has a special meaning to me, as it was also quoted at Ray Manzarek’s “Celebration of life” event in Napa, where Ray’s name was also the last word spoken at the event.