If the Doors had only recorded their debut album they would still have been assured a place in rock and roll history. Released in 1967 the album sounds just as fresh and exciting today as it did then. A mix of blues, rock and jazz, together with the voice and lyrics of Jim Morrison made the album one of the greatest debut albums of all time.

By the use of interviews, musical demonstration, rare archive footage and live performances, the program tells the story behind the conception and recording of this groundbreaking album. The surviving members of the Doors share their memories of the bands early days, the making of this album, and throw essential light onto living with the lyrical genius Jim Morrison.

With musical demonstrations from Ray Manzarek, Robby Krieger and John Densmore we hear some of the elements that went into creating the unique sound of the Doors.

In exclusive interviews the leading players in this story add insight to the Doors as musicians, composers and leaders of a generation. These include manager Bill Siddons, friend and Beat Poet Michael McClure and Jac Holzman who signed them to Elektra Records. Further insight is provided by musicians Henry Rollins, Perry Farrell, legendary Los Angeles DJ Jim Ladd, fellow film student Paul Ferrara, and music writer Ben Fong Torres. Bruce Botnick, the engineer on this and every subsequent Doors album, guides us through the process of how it was recorded.

There have been many myths built up around the Doors, and Jim Morrison in particular. In this program, which features cuts from Break On Through, Light My Fire, End Of The Night, Alabama Song, The Crystal Ship, Back Door Man, Soul Kitchen, and The End, the music takes center stage, confirming the undeniable fact that the Doors eponymous record was and remains a true Classic Album. 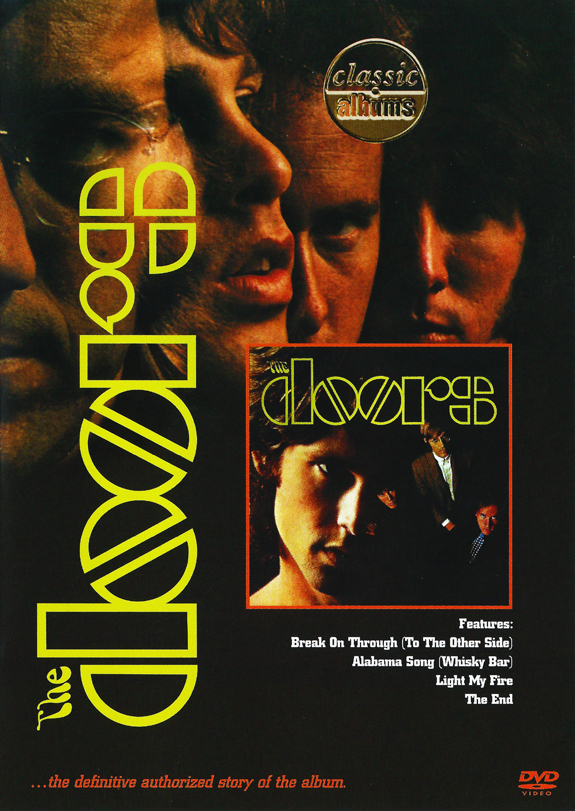 If I was forced to pick my all time favorite video release, this might just be it. This has all the stories about the making of the first album from all the people who were there: Ray, Robby, John, Jac Holzman, Bruce Botnick, Billy James, Mario Maglieri, Michael McClure, Bill Siddons, Paul Ferrara and Jim Ladd, plus artists influenced by The Doors such as Henry Rollins and Perry Ferrell. They go through each song on the album with commentary from everyone. Some of the best parts are with Bruce Botnick at his studio console playing rare Doors tunes and Jim’s isolated vocals, and when Ray, Robby and John demonstrate the techniques they used on their instruments. This is essentially a replacement of the 1980 release “Tribute To Jim Morrison”. I would recommend that everyone track this one down!

A few notes on Ray’s vintage gear and performances. While talking about the album, Ray plays a vintage Fender Rhodes piano bass and a Vox Continental. After The Doors broke up, Ray rarely played with his old setup. This is one of a few times you will see Ray, “post-Doors”, letting lefty do what he does best, and that is playing the piano bass. The only other places you can see this is on Story Tellers and the “Break It Down” video on YouTube”. For anyone who loves Ray’s storytelling and sound, this video is indispensable.

One other treat is Ray’s playing of “The End”. Ray always thought of this as “Jim’s Song” and rarely played it live or in concert after The Doors broke up. As Ray plays, you can envision yourself standing motionless on the dance floor of the Whisky a Go Go, mesmerized as Ray and the band play The End. This performance alone makes this a worthwhile DVD. And they did something with Ray’s “Meeting Jim on the Beach” story that makes it better than any version you will ever hear, and that is including Jim’s isolated vocal from an early demo of “Moonlight Drive” when Ray talks about Jim singing it to him on the beach. Absolutely amazing!