In early 2003, Ray was asked to narrate and host a two hour special on the Travel Channel called “Temples of Rock”. In this program, Ray showcases some of the most important and influential rock and roll venues and studios in the world with stories, interviews and vintage footage. Included in the show are segments on The Cavern club, CBGBs, the Fillmore, the Fillmore East, Hitsville USA and Sun Studios. Click here to view the trailer.

The final segment of the show is one all Doors fans will enjoy, a feature on the Whisky a Go Go. In this segment, Ray talks about The Doors’ days as the house band at the Whisky and then tells the great story of the first time Jim Morrison included the “Oedipal section” in “The End”. Click here to view that segment. 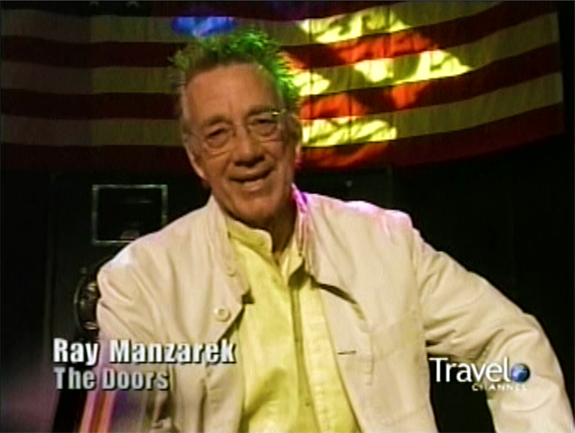 On Sunday, November 30 from 9-11P ET/PT, host Ray Manzarek, organist for The Doors, takes Travel Channel viewers on a psychedelic tour through time in the world premiere special TEMPLES OF ROCK. The two-hour special visits some of the most important performing and recording sites in rock and roll, namely: The Cavern, CBGB, Fillmore Auditorium, the Fillmore East, Motown’s Hitsville USA, Sun Studio and the Whisky a Go Go. Along the way, viewers will share in the eyewitness accounts of how The Cavern audience attacked George Harrison on the night of Ringo Starr’s debut with the Beatles, will hear stories of the unique relationship between the Fillmore East and the neighboring Tisch School of the Arts, and will get a peek at the less than stately bathrooms of the NY Bowery’s CBGB.

In addition, this unique documentary interviews rock and roll legends Dickey Betts, Graham Nash, Johnny Ramone, Martha Reeves, Smokey Robinson, Ringo Starr and members of the bands The Byrds, Chicago, Grateful Dead, and Talking Heads. TEMPLES OF ROCK features over 15 original songs from the golden days of the rock and roll age including: “Blue Suede Shoes,” “Dark Star,” “Ferry Cross the Mersey,” “Heat Wave,” and “White Rabbit.” Rare photos and archival footage of this period in music history are also included. Viewers will see film of The Temptations recording “My Girl,” in the original Motown Studio and video of the Allman Brothers Band performing “Whipping Post” live at the Fillmore East. And, they’ll meet a young punk rocker who traveled 1,013 miles for the opportunity to work at Sun Studio. A highlight of the program is host Ray Manzarek’s monologue performed on the stage of the Whisky a Go Go, set to The Doors’ song “The End” in which he recounts the infamous tale of The Doors final performance there. Viewers will learn about the philosophy of Berry Gordy, founder of Motown Records, who required his budding musical talent to participate in a finishing school of sorts where “students” learned how to dance, dress and act, both on and off stage.

At L.A.’s Whisky a Go Go, viewers will meet owner Mario Malieri, nicknamed the “Pope of the Sunset Strip” because of the outspokenness with which he dealt with performers regarding everything from the use of drugs to sexual hygiene. TEMPLES OF ROCK explores the social and political climate that influenced and accompanied the development of rock and roll music and demonstrates its impact on the people and venues that were its anchors. TEMPLES OF ROCK is an original co-production of the Travel Channel and Betelgeuse Productions in partnership with Clearchannel Entertainment Television. For Betelegeuse Productions, the executive producer is John Servidio and the producer is Carlo Gennarelli. For Clearchannel, the executive producer is Joe Townley. For the Travel Channel, the executive producer is Mark Finkelpearl.