In 2009, Ray and Robby were featured on an episode of Daryl Hall’s popular web series “Live From Daryl’s House“. The premise of the show is various musicians jamming with Daryl on both the artists’s songs and some of Daryl’s songs, with Daryl taking lead vocals. This episode is recorded at a rented house in Pacific Palisades where Robby Krieger was born and raised. Joining Ray and Robby in the studio is Daryl (lead vocals/guitar), Tom “T-Bone” Wolk (guitar), Eliot Lewis (bass) and Kenny Arnoff (drums). Along with some nice banter with Ray and Robby, they record versions of multiple Doors tunes as well as a few of Daryl Hall’s songs. 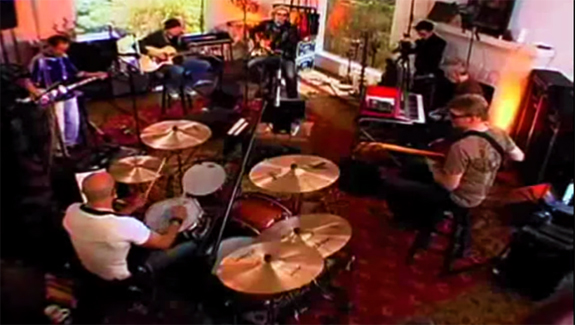 18th edition of landmark webshow features Daryl along with members of legendary Rock & Roll Hall of Fame group, The Doors.

NEW YORK, April 13, 2009—This month, Daryl Hall breaks on through to the other side of the country, Hollywood, to be exact, as Live From Daryl’s House celebrates its groundbreaking 18th episode with its first west coast edition. Daryl joins guitarist Robby Krieger and keyboardist Ray Manzarek of the legendary Rock and Roll Hall of Fame group The Doors for a very special installment of the acclaimed web series, which premieres April 15 at www.livefromdarylshouse.com, where it can be seen along with archived footage of past episodes.

Manzarek couldn’t get over the quality of Daryl’s band, enthusing: “What a great bunch of musicians! Real cool cats and bad dogs, a down and dirty blast. Daryl really cut loose on our Doors’ songs. And ‘Roadhouse Blues’ as a nasty, funky walk on the evil side entered almost forbidden territory, a place where, perhaps, musicians are not and should not be allowed to go…but we did. Wait ’til you hear it. It was too cool for school. I had a marvelous time.”

“I loved working with Daryl and his band,” adds Krieger. “And, it was great to see and play once again with Kenny Aronoff, one of my favorite drummers. It was also cool to go back to the Pacific Palisades, where I grew up, to play music with world-class musicians. It kinda completes a circle. My old high school was just up the street, so that was pretty neat! Thanks again to Daryl Hall for inviting Ray and I over for a great day of music!”

The trio perform a pair of Daryl Hall penned classics, “Kiss on My List” and “Borderline,” along with four Doors songs, “People are Strange,” “Break on Through (to the Other Side),” “Crystal Ship” and “Roadhouse Blues.”

“What a thrill to be able to play with such great musicians as Robby and Ray,” said Daryl. “I felt like I was having an out-of-body experience for a while there. It was that good.”

Live from Daryl’s House started with Daryl’s “light-bulb moment” idea of “playing music with my friends and putting it up on the Internet,” and the show has subsequently been praised by such varied publications as Rolling Stone, Daily Variety, Yahoo and the influential Lefsetz Letter.