The Wino And The Blindman

In this mid-1964 student film by Jose Gonzalez, Ray plays the “blind man” in a psychological tale of a wino who comes into good fortune and ends up learning a life lesson in the process.

The film starts with a scene of a blind man (Ray) slowly making his way down an alley with his cane. He stops and reaches into his pocket for something, and unbeknownst to him, a five dollar bill falls out onto the street. The blind man, not knowing this occurred, continues on his way.

The scene moves to that of a wino, waking up from his drunken slumber on the front stoop of a house. He looks around, somewhat dazed, searching for something. He finally finds exactly what he is looking for, his bottle for his morning drink. After finishing off the bottle and tossing it aside, he gets up and stumbles down the alley to start his day of wandering the streets looking for his next drink.

While walking down the alley, the wino spots the five dollar bill that the blind man had dropped. He picks it up and is ecstatic about his good fortune. He has a dilemma though. Should he spend it all on alcohol, or should he use his newly found luck to try and get his life on the straight and narrow? As he contemplates his decision, he walks up to a store front. To the left is the barbershop and to the right is the liquor store. The wino has an epiphany and decides to get a haircut and turn his life around. Our wino is so energized and satisfied with his decision that, as he walks in to get his haircut, he puts a quarter into the cup of the blind man who is standing outside the barber shop.

After his haircut and shave, the wino is feeling like a new man. He is very confident about his outlook and decides to help the less fortunate blind man, so he puts the rest of his change in his cup. As he is doing this, an old woman accuses the wino of trying to steal money out of the blind man’s cup. The wino becomes very confused and runs off, effectively ruining his day and pushing him back to his old way of life. This leads him back to the liquor store where he purchases a few bottles of wine and proceeds to become totally inebriated. In his drunken stupor, he decides that he really does want to help out the blind man after all. He runs as fast as he can back to the barbershop where he remembers the blind man standing. He is so drunk that he actually runs into the glass door of the barbershop and falls back on the pavement. As he lay on the ground, he is surrounded by a crowd that laughs at him and makes fun of what they just witnessed. Our wino gets up and runs off, being totally humiliated for a second time that day.

As the wino wanders through the back alleys of Venice trying to make sense of what has just occurred, he sees the blind man walking across a parking lot. Before he can say anything to him, he sees the blind man fold up his cane, take off his sunglasses, get into a convertible, and drive off (even giving a “wink” to the camera in the process). The wino is stunned by what he has just witnessed. You can see the wheels in his head turning as he attempts to comprehend what he has just seen. You can almost see the light bulb go off in his head when he figures it all out, at which point the wino smiles.

The next scene jumps forward to the next day, as we see the wino, now wearing sunglasses and holding a blind man’s cane, working his way down an alley towards a new day and a new life. 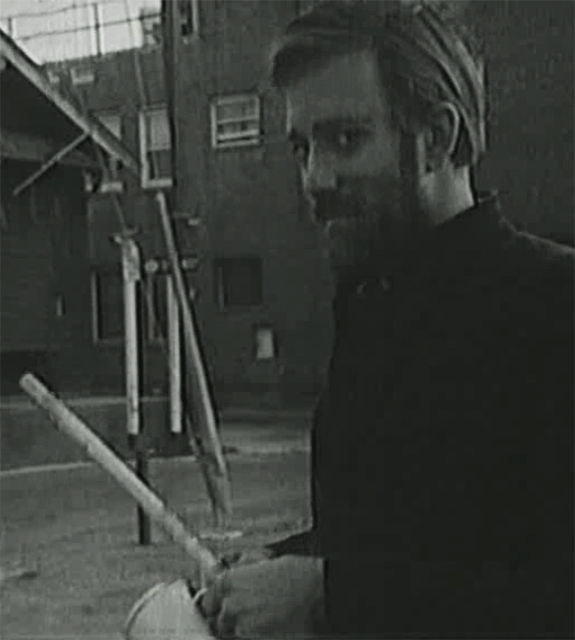 We Need Your Help: Although we do have a copy of this film in the Manzarek Archives, very little is known about the creation of this film and the rumored stories of the fate of Jose Gonzales once he left UCLA. He is rumored to have had a very hard life following his time at UCLA. If you have more information about this film or Jose, please contact us using through Ray’s social media sites.