Who And Where I Live

This “pre-workshop exercise” was one of two films that Ray completed in 1965. This 8mm color film features Ray’s girlfriend (and future wife) Dorothy Fujikawa. It documents Ray and Dorothy’s life together at their upstairs apartment on Fraser Avenue in Venice Beach.

This film was chosen to be featured in UCLA’s sixth semi-annual “Evening of Student Films” at Royce Hall in Fall of 1965. This was a silent film, so when it came time to screen the film, Ray wanted to have a live soundtrack played at the screening. At that point Ray had already graduated and The Doors had already formed, so he invited Jim, Robby, John, Dorothy and Jim’s girlfriend Mary Werbelow to play instruments as the film played. It is not known if Ray’s film was shown on December 10th, 11th, 17th, 18th or 19th. Due to the amount of films that year they broke it into five days with two hours of films each evening at 8 pm.

Description of the evening from the program:
The Preview, or first public showing of a film, has long been an important part of the film-making process. Films are made to be seen by an audience and sooner or later, film and audience should meet face to face. The films presented this evening have not been shown before; they have been seen only by the students and staff of the Motion Picture Division. Your response to these films will let the film-makers know where they have succeeded and where they have failed. For a student of film-making, the first public showing of his film is perhaps the most sophisticated lesson of all.

Also featured at that “Evening of Student Films” were the following films:

The official name for this event was “Op, Pop & Kicky Flicks – An Evening of Student Films From Out Where It’s All Happening Hey 1965” 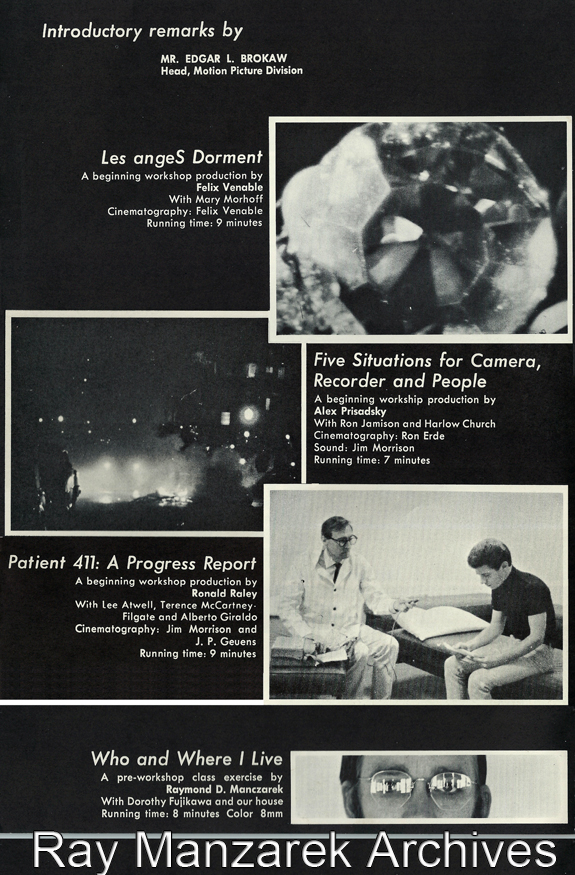 Help! We are actively seeking a copy of this film for Ray’s archives. If you were involved in the making of this film or have any additional information or corrections, please contact us through Ray’s social media. Thank you!