A Tribute To Jim Morrison

“A Tribute To Jim Morrison” is a full exploration of the controversial and quixotic singer, delving into his fascination with cinema and psychology, mysticism and sexuality, poetry and power. In addition to performance clips of the band in action, it features interviews with all of the surviving members of The Doors and many others who were instrumental in creating and maintaining the legend, from record producer Paul Rothchild to biographers Danny Sugerman and Jerry Hopkins (on whose best-seller No One Here Gets Out Alive the program is based). Also featured are segments from some of the radically experimental promotion films made by The Doors whose music was influential even upon such contemporary movie-makers as Francis Coppola (who opened his Apocalypse Now with “The End”). More than a simple rock band documentary, “A Tribute To Jim Morrison” is a profile of one of the most fascinating and complicated artistic minds of his generation.

This Hollywood Heartbeat production was the very first compilation video of Doors material, riding the wave of popularity following the release of the Hopkins/Sugerman book “No One Here Gets Out Alive”. It contains archival footage combined with clips of Doors performances from “The Doors Are Open” and the Hollywood Bowl, plus TV performances from Jonathan Winters, Ed Sullivan and Smothers Brothers. Also included is the footage from “Apocalypse Now” utilizing “The End”. In between the clips are interviews with Ray, Robby and John as well as Paul Rothchild, Danny Sugerman and Jerry Hopkins. Although the interviews are very dated due to the early ’80s clothes everyone is wearing, these are classic interviews with some of the best Doors quotes you will ever hear. This is where you will here Ray’s best version of the “Meeting Jim on the Beach” story.

In the late ’80s when they released this on DVD they changed the name from “Tribute To Jim Morrison” to “No One Here Get’s Out Alive”, which was essentially the subtitle for the initial 1981 release. This DVD was last released in the early 2000s and is currently out of print. You can still find used copies in abundance. 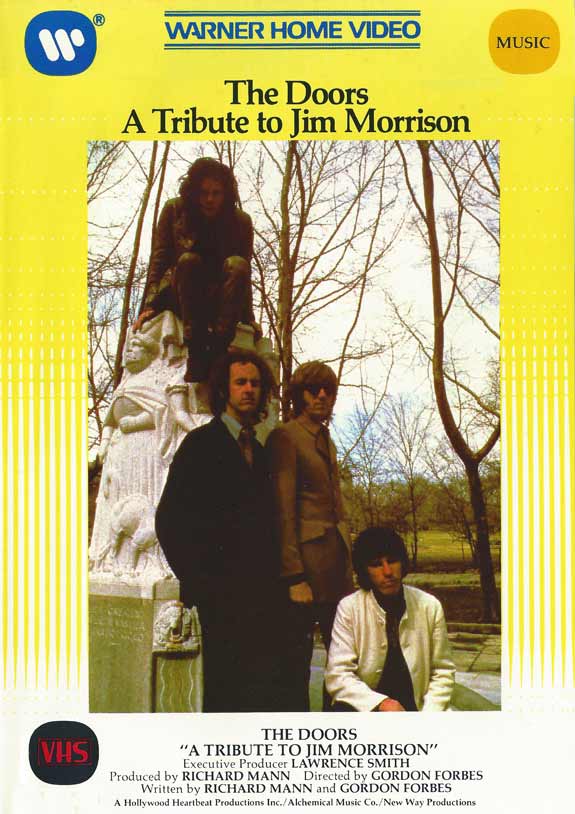 Produced in 1981 by Hollywood Heartbeat Productions.
Released in 1981 by Warner Home Video on VHS
Later re-released on DVD as “No One Here Gets Out Alive”
Length: 60 minutes
Color/Black and White, Stereo