NEW YORK, June 1 — VH1 Classic and World Productions are proud to present DECADES ROCK LIVE, an innovative new live concert series set to premiere on VH1 Classic in September 2005. DECADES ROCK LIVE will feature performances by celebrated artists from rock and soul who have influenced popular music over the last 50 years, as well as performances from some of today’s hottest recording acts who have been inspired by these legends. Each one-hour episode will focus on a specific artist. Artists scheduled to participate in the series include some of the most renowned names from the world of music. The first show taped will star “The Doors of the 21st Century,” featuring Robby Krieger, Ian Astbury, and Ray Manzarek. Special guests will include Perry Farrell from Jane’s Addiction, Macy Gray and legendary rock guitarist Pat Travers, the original Vanilla Fudge and hot rocking girl band Antigone Rising. The full line-up for the series will be announced in the coming weeks.

DECADES ROCK LIVE will be taped at Trump Taj Mahal’s high definition television studio, The Decades Rock Arena (temporarily renamed from Mark Etess Arena for the duration of the series run), in Atlantic City, NJ beginning August 5. The music performances will be augmented with special features, such as “Decades Confidential,” exclusive behind-the-scenes interviews with artists, focusing on their career milestones and highlighting their newest releases, concert performances and other endeavors. DECADES ROCK LIVE segments will also include “Fan Factoids” from viewers sharing their knowledge of music facts and figures, incorporated as pop-up quotes and trivia in every episode. Additionally, DECADES ROCK LIVE will feature several special themed shows that will include recording acts from the past five decades celebrating a specific musical genre or period.

“DECADES ROCK LIVE is a concert series that recognizes the musical contributions made from legendary recording artists, not only for their past successes, but for their ability to change with the times and their ability to influence rock and roll for decades to come,” says Barry Summers, executive producer and series creator. “For those that want to rock, we salute you!”

In addition DECADES ROCK LIVE will be broadcast in High Definition in 5.1 surround sound, and rebroadcast on a premium HD network at a later date. 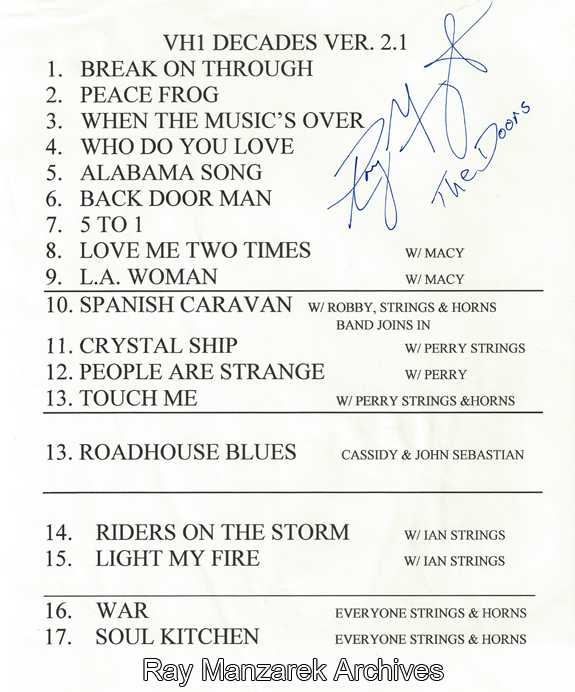 As you can see from the above press release, this was a pretty epic project. Capturing Ray and Robby in High Definition doing what they do best with artists such as Macy Gray and Perry Ferrell, to be featured on the premier episode of VH1’s “Decades Live” television show. Very unlucky circumstances around this show, as this was happening right in the middle of the band’s legal troubles. A few things occurred right before taping that more of less doomed the project, so right now.. somewhere.. this show sits unseen in a vault. Who knows, maybe this will see the light of day eventually? Let’s hope so.