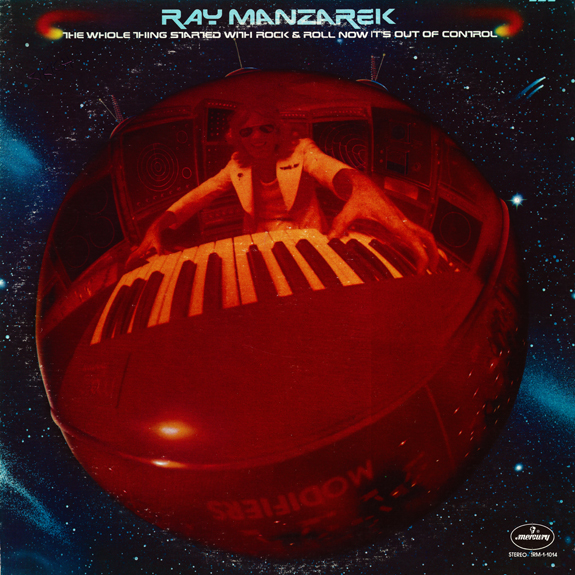 Currently out of print and not available. This is one of the titles we hope to make available to the fans. 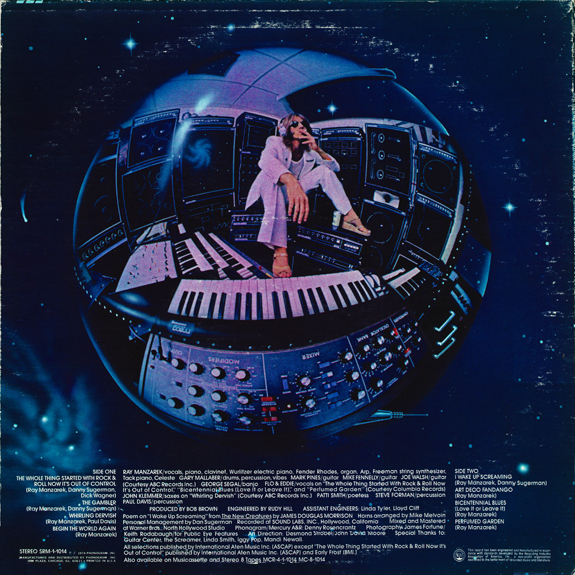 1.The Whole Thing Started With Rock & Roll Now It’s Out Of Control
2.The Gambler
3.Whirling Dervish
4.Begin The World Again
5.I Wake Up Screaming
6.Art Deco Fandango
7.Bicentennial Blues (Love It Or Leave It)
8.Perfumed Garden

RAY MANZAREK: A NEW ALBUM, A TOUR, AND AN EXCLUSIVE INTERVIEW

Ray Manzarek, excited about his new album and about to set out on a cross-country tour, appears to be finding a permanent niche for himself in the up-and-down world of rock music.

Manzarek, who tasted super-stardom as keyboardist and co-leader of The Doors in the 1960s, has taken his time building his solo career. Although he was largely responsible for The Doors’ keyboard-oriented sound, Manzarek’s name was never the household word that his super-star partner Jim Morrison’s name was.

After Morrison’s death in a Paris bathtub, Manzarek’s first inclination was to keep The Doors alive. But the public didn’t seem to want The Doors to carry on without Morrison, so Ray let the group die.

Taking some time off, he came back with his first solo album, “The Golden Scarab”. The record received critical acclaim, but sold only modestly. In an exclusive interview with Earth Starship, Manzarek explains: “The first album was an opening statement – a complete, concise, and heavily personal statement. I had to do that first”.

Now, Mercury Records has just released Ray’s new album, “The Whole Thing Started With Rock & Roll, Now It’s Out Of Control.” “This time,” says Ray, “I just tried to make songs, just for the sheer joy of making music.” But, in making a less-heavy statement, Manzarek has not given up his talent for writing stirring, story-telling lyrics.

“The stories are what the songs are about,” explains Ray. “The songs themselves are the rhythmic foundations on which to tell the story – to make a comment. I think every lyricist ought to make a comment about something, as they’ve got the perfect opportunity. The musicians are playing the music for the words.”

On the new album, Ray spins stories about gambling, screaming, perfumed gardens, and even the upcoming U.S. Bicentennial.

“Bicentennial Blues (Love It Or Leave It)” is both a timely protest song and a tribute to those freaky days when The Doors were first the rage. Midway through “Bicentennial Blues”, Ray breaks into a 1975-rendition of “Light My Fire,” The Doors’ first hit.

Manzarek explains how that happened: “We were just jamming on it one day and all of a sudden out of my fingers came ‘Light My Fire.’ A lot pf people have been asking me – When I go out on the road – to play an old Doors song. So, I thought I’d throw in a little taste of ‘Light My Fire’ for the good old Doors fans.”

Ray Manzarek has not abandoned his roots, but has taken them with him as his music has grown from standard blues-oriented rock and roll to something “out of control.” “My music,” says Ray, “is constantly evolving, and I’m never sure exactly what it’s evolving into.”

A single from the new album has yet to be chosen, but Ray’s writing partner – Manager Danny Sugerman says that early airplay of the L.P. points to a Doors-sounding cut called “The Gambler.” Also under consideration is the title cut. Says Ray, “It’s always hard for me to go in and think about a single, for I feel for all of the songs… I love each of them in their own particular way.”

Manzarek fans in many cities will soon have a chance to see and hear Ray’s new material as he sets out next month on a cross-country concert tour. His four-piece band includes former members of such progressive rock bands as Silverhead and the Stray Dogs. The tour begins with a stint at Hollywood’s Whisky a Go Go this month and then moves to the East Coast. “We’ll be working our way back across the country, and we’re gonna go out and rock ’em,” vows Ray.