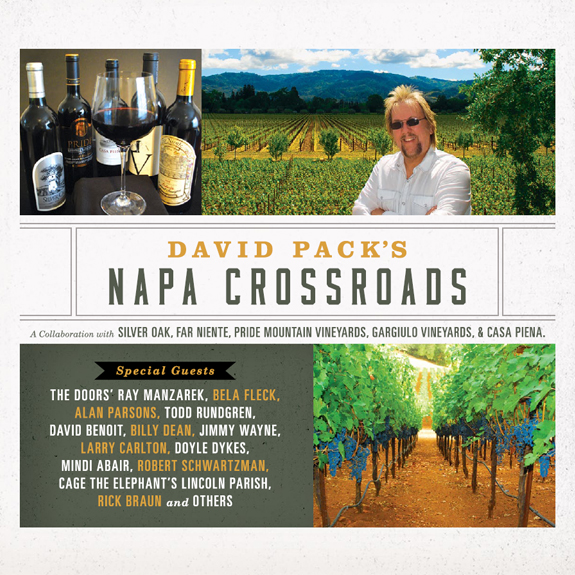 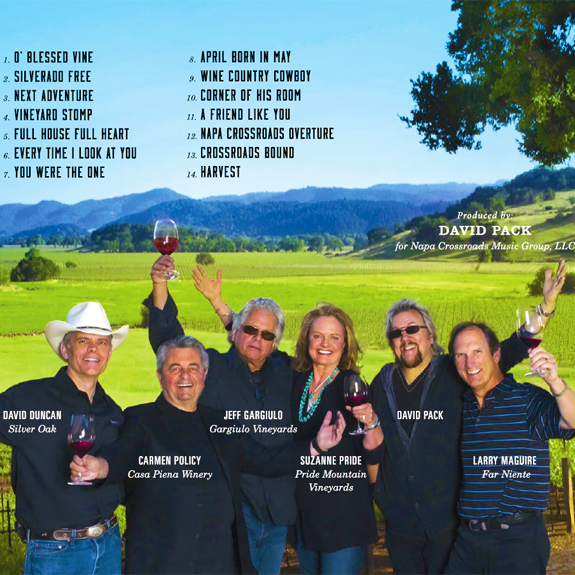 1.O’ Blessed Vine
2.Silverado Free (featuring Ray Manzarek)
3.Next Adventure
4.Vinyard Stomp
5.Full House Full Heart
6.Every Time I Look At You
7.You Were The One
8.April Born In May
9.Wine Country Cowboy
10.Corner Of His Room
11.A Friend Like You
12.Napa Crossroads Overture
13.Crossroads Bound
14.Harvest

Pack describes the experience as “Five years, five wineries and a lot of fun.” He goes on to say, “It’s a time capsule to preserve the memory of friends, Napa Valley and a time that will never be again.” Noted producer and musician, Pack has been drawn to Napa for many years with an unrequited passion for viticulture. He became a welcome figure in the Napa community a number of years ago after developing a friendship with winemaker Jeff Gargiulo and playing concerts for local events in the community. That friendship opened Pack to the world of undiscovered musicians among the winemakers and incited Pack’s desire to create a recording that serves as a backstage pass to a once-in-a-lifetime special event.

The wineries invested in the album financially and creatively, collaborating on two tracks each along with contributions from special guests, culminating in 14 tracks of original material. All songs were produced by Pack and written and recorded in Napa Valley beginning May 2009, which includes one of the final recordings of the late Ray Manzarek.

This release, which I didn’t even know about until contacted by David Pack, contains what is either the last (or second to last) studio recording Ray ever made. Ray is featured on track #2 called “Silverado Free”. If someone were to have asked me, “What would you like to hear on Ray’s final recording?”, my answer would have definitely been “Ray playing a classic Vox Continental”. My second answer would most likely be “Ray telling one of his favorite stories as only he can”. Both are featured on this track. For this song, they recorded Ray playing both a Steinway piano track and a Vox Continental track. They ended up using both. Towards the end of the song they feature a short section with Ray talking about the ’60s. A really nice song written by David Pack. A really great compilation album and worth picking up.