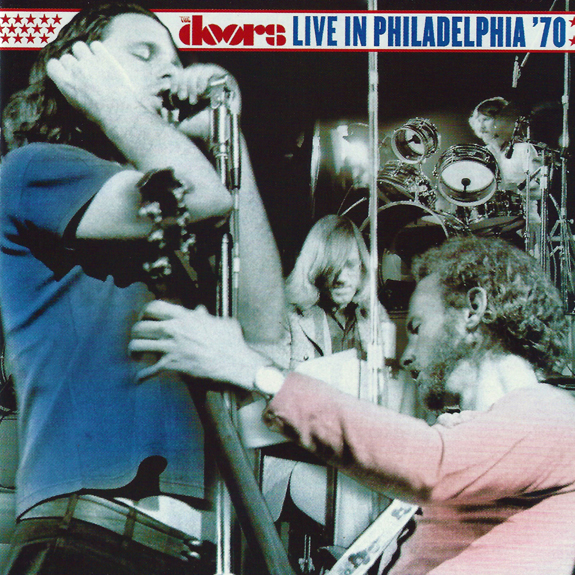 Currently not available as a standalone release. Included as a part of the digital box set, Strange Nights of Stone. 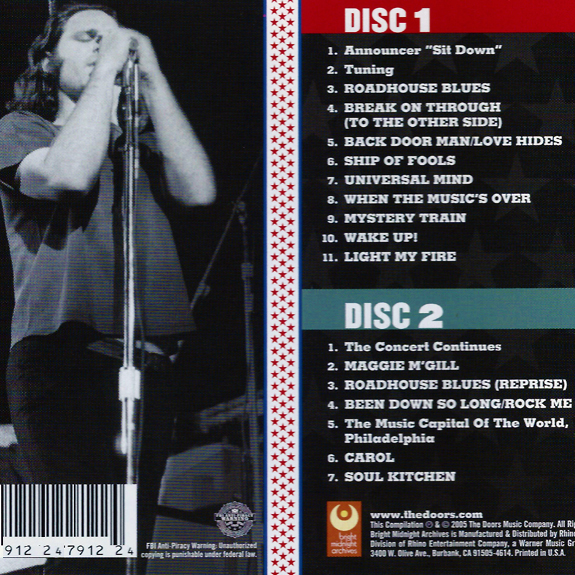 This extraordinary Doors performance took place May 1, 1970 in front of more than 14,000 fans at the Spectrum in Philadelphia. The show was a highlight of what would prove to be the band’s final tour and showcase their unique musical chemistry at its roiling peak.

The Miami debacle of March 1, 1969 created so much controversy that for a time the band had been unable to tour. Jim Morrison’s desire to whip his audience into a froth had culminated in various provocative acts – some real, some rumored, and some only imagined; authorities subsequently charged him with lewd and lascivious behavior (a felony), indecent exposure, public profanity, and public drunkenness. Reports about the Miami show had galvanized certain self-appointed protectors of public decency, who pressured city officials nationwide whenever new shows were booked. As a result, the remainder of the band’s spring 1969 tour was cancelled.

The Doors played scattered dates during the rest of the year, but it wasn’t until early 1970 that they truly rebounded. With the superlative Morrison Hotel album in stores and their newly revamped live set earning enthusiastic reviews and blockbuster audience response, the quartet begun a new tour in Boston on April 10. It marked a triumphant return for The Doors, who now presented a level of musical mastery that put the circus-like spectacle of Miami in the shade. Morrison’s vocals had greater force and maturity than ever, while the telepathy of Ray Manzarek, Robby Krieger and John Densmore allowed for astonishing new plateaus of freewheeling interplay and groove.

The Doors stayed especially sharp by generally limiting the shows on this tour to weekends and brought their own sound system, built by Vince Treanor.
The morning of May 1 saw Morrison sit for an interview with Michael Cuscuna of Down Beat, a jazz-oriented publication that rarely expressed much interest in rock. The interview lasted through dinner, and the writer was sufficiently moved by the band’s one-of-a-kind stylistic fusion to hail The Doors as “a tight musical unit that is equally rooted in the spirit of rock and the feelings of jazz.

The night’s show was at a storied arena. “That’s where Doctor J played with the Philadelphia 76ers”, says Manzarek of the Spectrum, with a note of awe. “We were out there on the court – it was like the 76ers and the Lakers, but we were all on each other’s side. It was us and Philadelphia. And Philadelphia is a great, great town for rock and roll – one of the best in the country – not to mention cheese steak, which I had the next night.”

The arena had a reputation for unruliness, and the group, disinclined to let another show get out of hand – or to rely on the typical venue security force of off-duty cops and college linebackers – came prepared. “We had heard the Spectrum had problems with violence – crowds going wild – so we hired these guys called the Sullivan Brothers,” recalls Krieger, “These guys were heavies. They were these black guys, maybe 10 or 12, and they wore these fedora hats and black suits. We had to walk through the crowd to get to the stage, and each Door was encircled by these three mammoth black guys.” “They were a detective agency, and they had these tight little Miles Davis suits,” adds Manzarek. “Man, they were like Shaft. We had a great time hanging out with those guys, and everything went very smoothly.” Adds Densmore, “They were great security, and they really took pride in their work. Nothing could get through these guys, because they were so intimidating. But they were really friendly.”

Even so, the crowd was anything but placid. “We couldn’t even begin to play until all the people were in their seats,” Manzarek remembers. “They were all jammed up at the front – anticipating Morrison, Densmore, Krieger and Manzarek – but we couldn’t take the stage until they went back to their seats in an orderly fashion. Only then would the Fire Marshal allow the show to continue. His whole trip was: You have to clear the isles. What if there was a fire? Well, the place was made of metal and concrete; what was going to burn, except for The Doors’ music? So we waited until the Fire Marshal gave the OK to the MC, who said, ‘Ladies and gentlemen, from Los Angeles, California, The Doors.’ Immediately, everyone who’d been made to sit down stood right back up. But by then it was too late. We just burned and jammed and played out music with the whole place rushing the stage.”

“We didn’t have monitors and the mains were pointed away from us,” Krieger recalls. “I couldn’t hear a damn thing. I felt like I was on acid. But I felt we played pretty well.”

“Jim was in good spirits,” notes Densmore. “By that I mean he was in that delicate balance where he had a buzz – which took the edge off his nerves – but wasn’t too intoxicated.” The drummer describes Morrison “throwing in bits of improvised poetry, moaning through blues numbers like a funky harmonica.”

“There was some ingestion of certain lightly hallucinogenic substances – smoked,” offers Manzarek. “Some chronic. We were in the moment. We would bring that psychedelic California vibration to the East Coast, and while they were stoners and heads themselves, they didn’t have the Pacific Ocean in their bodies that we brought with us – that strange azure liquid we carried with us at all times. The waters of the unconscious.”

Starting with a sizzling rendition of “Roadhouse Blues,” the quartet powered through an authoritative set that included – among other classics – “Break On Through,” “Back Door Man,” “When The Music’s Over,” “Light My Fire,” and a thoroughly altered, improvisation-heavy reprise of “Roadhouse.” “I think there were sound problems the first time we played ‘Roadhouse,’ volunteers Krieger. The show concluded with a smoking “Soul Kitchen.” The Philly show emphasized both the adventurousness and versatility of the band’s songwriting and it’s earthy grasp of the blues.

“The Doors appeared onstage, greeted by a mass of screaming fans, and began an exciting set of jazz-rock,” wrote Down Beat’s Cuscuna of the Spectrum show. “The rhythm section was burning as the ‘onstage’ Morrison (loud, mystical, dramatic) belted out some of the group’s better-known songs. Shades of the exciting innovative Doors of old!”

“There’s a lot of spirit there,” Densmore observes of the recordings. “’When The Music’s Over’ has a lot of passion, and Morrison has a very throaty baritone on there. It’s great.”

Several shows on the 1970 tour were recorded on multitrack for the “Absolutely Live” album, and the attention to detail exhibited by engineer Bruce Botnick and his team resulted in superior sound quality both in the arena and on tape. Bruce also mixed and mastered this superb release, which brings out stunning new crispness and nuance in the original recording. The Spectrum show stands as a monument to the live Doors experience as its richest.