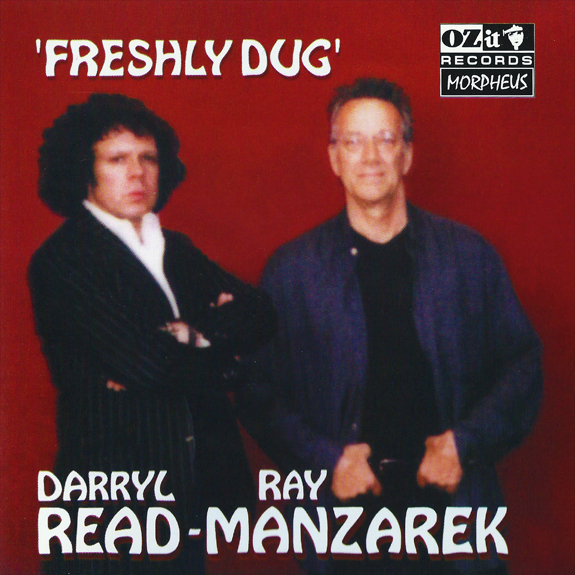 Available in iTunes, Amazon.com and CDBaby. 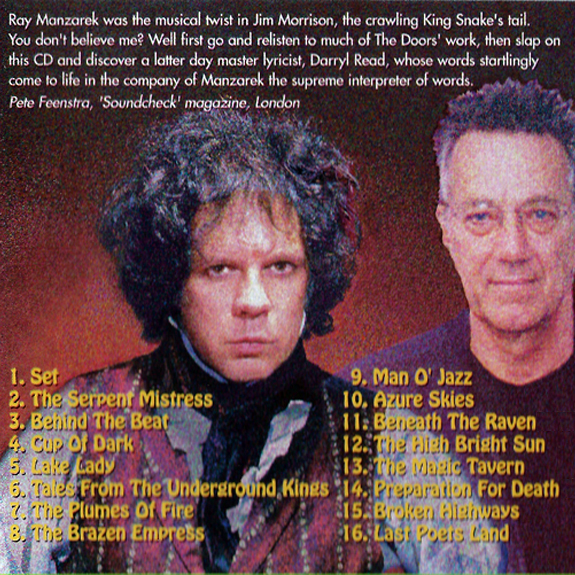 This is the first of two collaborative releases between Ray and UK poet Darryl Read. I know Darryl was extremely proud of this release, as he had every right to be. Darryl recites his poetry and Ray improvises the soundtrack on classical and electric piano as only Ray can. Even if you aren’t that into Darryl’s poetry or spoken word albums, one can’t help but be amazed by the beautiful accompaniment Ray adds on top of Darryl’s poems. This CD was released and distributed by OZIT/Morpheus Records. Doors fans might recognize them as the distributor of “import” CDs such as “Stoned But Articulate” and “The Ultimate Spoken Word”. If you are looking to find copies of this CD, it was released with at least three different covers, none of which Ray or Darryl were particularly happy with. Don’t let that keep you from picking up this release, as this is a high quality recording and showcase of both Darryl’s poetry and Ray’s improvisational accompaniment skills.

Christmas 1998, I rang Ray to apologize for not sending a Christmas card. In conversation I mentioned that I needed to make some poetry inserts with music for a new rock album that I was slowly putting together. I asked whether he could perhaps record four or five tracks with me. As I was thinking of a trip to L.A., Ray said he was around and would play, but first he would look at my poetry.

I fixed up a date to meet in late January 1999. We met as the Hilton Hotel in Beverly Hills where I had twenty or so works that I’d written throughout 1998. Over drinks in the bar Ray checked over the handwritten pieces with me and picked out a few that he thought were appropriate. I also recited a few to him and I could feel he dug them. Next I hired a studio with the help and suggestions of my old friend Terry James Stamp (of Third World War fame). Ray wanted an eighty-scale keyboard. Black Ball Studio, the second choice of studio, had one.

We set the date for the 1st of February, 1999. Ray invited me to a poets meeting at the Bookshop in Westwood. At the meeting he said he’d been thinking about the works. Two years ago, when I had visited him at the Venice Film Festival in Italy, Ray and I had discussed the possibility of performing live some poetry and music, so now we were doing it. February 1st came quick and I’d spent days at the hotel running over my words and copying them in my best handwriting in big letters so Ray could read ’em off easy. I had no idea what the Black Ball Studio was like, but from my conversations with Mr. Black who owned the place, it sounded funky – and it was.

I arrived at 5:15 pm in the downbeat Hollywood street. The studio was over a shop called “The Wondershop” which was full of antiques and junk. I was welcomed by a young black woman who ran the shop and handled the studio bookings. The place was full of lighted candles and burning joss sticks. I took a look upstairs at the studio, small but full of soul, with a little vocal booth that looked over the control room. I met our engineer Dorian, a young black quiet cat. Ray arrives, buzzing with directional energy, “Let’s see the keys”. Mr. Black, a cool young black dude dressed like early seventies “Shaftified” like hip burns, etc. Ray starts digging in, “Ok man, where’s the lyrics?” I produced twenty-six works in big handwriting, “Hey Darryl, we have to cut these down”.

I had presumed that we could get more than five works done, so I came well prepared, but in reality I was very nervous and had been for three days, as this would be my first poetry session. “Well Ray, how many shall we do?” thinking five or six, “Well, you’ve got twenty-six poems here, let’s cut it down to fourteen”. I immediately began to start selecting. “Oh, Mr. Black..”, Ray was calling, “can we have a music stand?” No, there were no stands. Ray started neatly taping the words together so that each piece could be fastened on top of the keys. “Oh, Mr. Black.. oh, Mr. Black.. can we get some levels in here?” Ray was directing the whole scene brilliantly; the whole night was beginning to take on an air of high intensity. I sat in the small vocal booth, shuffling my words around balanced on a stool. Mr. Black had kindly removed the sleeping bag and blankets from the boarder of the night before. The earphones were falling apart. I asked for another set. I was nearly rigid with nerves. I did a vocal balance and the sound Dorian got was great and intimate. “Ok, let’s get going” Ray commanded. I plunged awkwardly into ‘The Serpent Mistress’, blowing it badly, but the keys were dynamite. We did a take with a bad performance from me. Take two was the same. “I can dub the words in England as long as we get the shape”, I bantered to Ray. We went into ‘The Plumes of Fire’ with equal blowing on my behalf, then moving on to the ‘Brazen Empress’. I mustered up all my most professional confidence and jumped into the first take. It was really smooth. I was starting to crack it. Take two was cool. Into the next set, bang, another one down, two versions. After five works we knew we were getting it. I asked Mr. Black for a Diet Coke with Ray saying he wanted a beer. I changed my order to a beer. We took a break while Mr. Black shot out and got a crate of beers. Sitting at the back of the Wondershop over the street, Ray and I kept our intensity up but not ever talking about the work. The atmosphere was more than electric. After our twenty minute beer break, we went in again and knuckled down two more takes. Penny Norris, my friend and companion, was taking photos and video. She was also feeling the intensity, as was our quiet but cool engineer Dorian. Also our host Mr. Black was digging our creative process with cool respect. The session had been going for five hours and we were now plowing thoroughly, two takes on each work. Ray was reading my words as music, something I had never seen done by anybody. We were complementing each other’s words/music riffs live. Ray was twisting and flourishing around ever syllable. We hadn’t as much as said, “That was good” to each other, we were just burning and laying tracks. In fact, by nine-thirty they were down – that was twenty versions. By ten fifteen we’d got fourteen, no fluffs, live recordings, twenty-eight in total. “Let’s do two more” I suggested. “Ok, let’s do it” Ray commented. Bang, four more down, and that was it, all live and perky. I instantly wiped the two recordings that I blew and we were left with sixteen titles done in duplicate. “Cool session man, great poetry” Ray announced. Dorian asked me what certain poems meant. I could tell he had been interested. When engineers get into it, you know something’s happening. Ray left and I was still in another realm. I didn’t fully realize until a week later that we’d completed so much in that short space of time.

I got the master copies back to London where me, my friend Clive Zane and Martin Randle, mixed and selected a running order from the twenty-eight takes performed. There are no overdubs or drop-ins. The sixteen takes you hear are raw and live by the guv’nor Ray Manzarek who reads words as music.