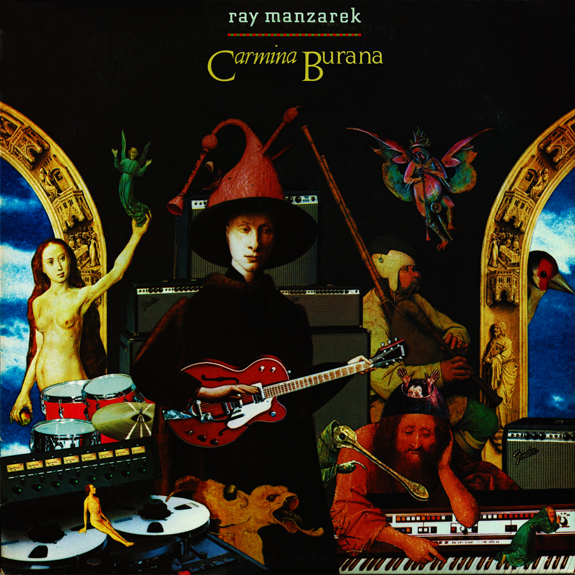 Out of print. Not available. 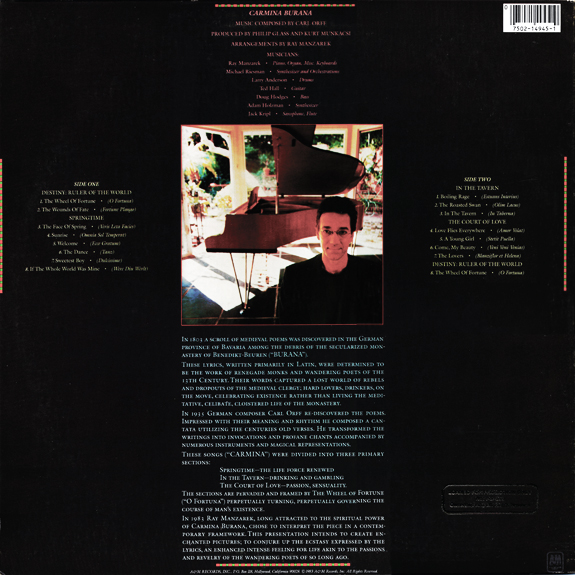 There are many successful precedents for contemporary versions of great classics, Switched-on Bach, Hooked On Classics and A Fifth of Beethoven are standout examples, and for recording artists like Patrick Gleason and Tomita, modern interpretations have become the basis of careers.

There is clearly public interest waiting to be tapped, and Ray Manzarek’s choice of Carmina Burana could spark that interest. Combining beautiful melodies with powerful rhythms, it is a piece that is already in the public mind, since excerpts from it were used in the hit films, The Omen and Excalibur. But few high tech classics can offer what this version of Carmina Burana represents: an unprecedented collaboration between a legendary rock musician like Ray Manzarek and a modern classical talent like Philip Glass.

As a result, the potential audience for this album exists in many areas of musical taste, including those who’ve followed the careers of Manzarek and Glass, and those who’ve followed the intriguing history of the piece itself. As various articles in the press have indicated, controversy has surrounded this music since its creation in 1935; the lively debate over its interpretations continues with this version, one of the boldest attempted yet.

As with any piece which changes the way we’re used to hearing music, the Carmina Burana of Ray Manzarek and Phillip Glass is bound to send sparks flying. This is to be welcomed.

As the New York Times noted, the sensual theme and pounding rhythms of Carmina Burana anticipated rock n’ roll, while the back-to-basics approach of its composer serves as a precedent of the modern classical minimalism of Phillip Glass. From opposite ends of the musical spectrum, Manzarek and Glass have met to create visceral, gut music, a record that Cashbox described as “new age classical music.”

A three-tiered approach will be launched at forward-thinking radio stations nationwide. For album-radio programmers a special sampler has been compiled, to be shipped in January featuring the tracks: “The Dance”, “The Wounds of Fate” and “Boiling Rage”. Special emphasis will be placed upon”The Dance” since it’s the LP’s most powerful, propulsive rock instrumental. Not surprisingly, it was this particular music from Carmina Burana that first attracted Manzarek to the piece itself.

Shipping also at the beginning of January will be audiophile pressings of the LP to fine arts, jazz and national public radio stations. To target and track theses stations, the list from Windham Hill will be utilized.

Early in ’84, Compact Disc versions of Carmina Burana will be sent to the album-oriented stations nationwide which possess the technology to play CDs. A corresponding mailing to fine arts CD stations will also be made, underscoring the point that this album is a state-of-the-art project, both technically as well as creatively.

For a work as ambitious as Carmina Burana, Manzarek knew that a striking visual representation would be an important component in the presentation of the piece. For the video to accompany Carmina Burana, he is collaborating with one of the most inventive directors to emerge in the new wave of music filmmakers, Kit Fitzgerald.

Known for the striking imagery in videos like King Crimson’s “Big Electric Cat”, Fitzgerald is becoming known as a director to watch, and music TV programmers are doing just that. Her reputation adds yet another dimension to the Carmina Burana project; another example of the first-rate talent which Ray has assembled.

In this video clip, a “cinematic miniature” photographed as Southern California’s classic missions, Manzarek plays a renegade monk. It’s a transformation that’s of interest not only to his rock fans; it’s also attracted the attention of L.A’s classical music establishment, where interest has been expressed in presenting it at The Mark Taper Forum. Fine arts TV channels are of course primed as well. Look for the video in early ’84.

Ray Manzarek continues to be one of popular music’s most enduring figures, more visible than ever as a result of the resurgence of The Doors. Through a great deal of recent exposure on TV and radio specials, Ray has continued to draw attention to the rock n’ roll energy that’s in Carmina Burana.

But the rock n’ roll side is just one aspect to be developed. The role of producer Phillip Glass in this controversial interpretation could also be explored in more traditional music publications. There may be great potential exposure in the ongoing debate over “unorthodox” versions of beloved pieces like Carmina Burana.

Additionally, it will be appropriate to solicit music trade coverage of the audiophile and CD promotions. An unusual angle exists in that the A&M will be servicing audiophile LPs not only to radio, but also to retail outlets to encourage in-store play.

As with any multi-format record, in-store play is critical in overcoming the classical music inhibitions of many rock consumers. The audiophile pressings being made available for this purpose make the statement to retailers that A&M is committed to giving Carmina Burana the patient support it deserves. It is an album with a potentially long life, and this message should be made clear.

It will be essential to the success of Carmina Burana that it be available in multiple bin locations, cross filed under The Doors and Ray Manzarek as well as in the classical section.

The arresting cover graphics by noted California artist Lou Beach also bear witness to the imaginative quality of this project, and full color posters are available. Beach’s witty and colorful collage captures the contemporary attitude of Manzarek’s approach, and can be utilized to attract consumer attention. And all inventory will bear stickers highlighting the unique nature of the Glass-Manzarek collaboration.

Advertising in direct mail publications for classical music buyers will also provide a means of reaching Carmina Burana’s audience specifically. The goal of this campaign will be to make consumers aware of Phillip Glass’ participation, a significant selling point as his credibility continues to grow.

We need to target the people who think they know what Carmina Burana is all about, and intrigue them with the possibility that they just might hear something new under the sun.

Whatever the area of strategy, the rationale behind the campaign for Carmina Burana is that the music business is big enough, diverse enough to possess an audience for something unique. We’ve seen Linda Ronstadt team with Nelson Riddle, and Willie Nelson pair with Carlos Santana. The time is ripe for imaginative combinations, particularly those which offer what Manzarek has called “four on the floor rock n’ roll.” Getting that across might not be easy, but it’s worth it.