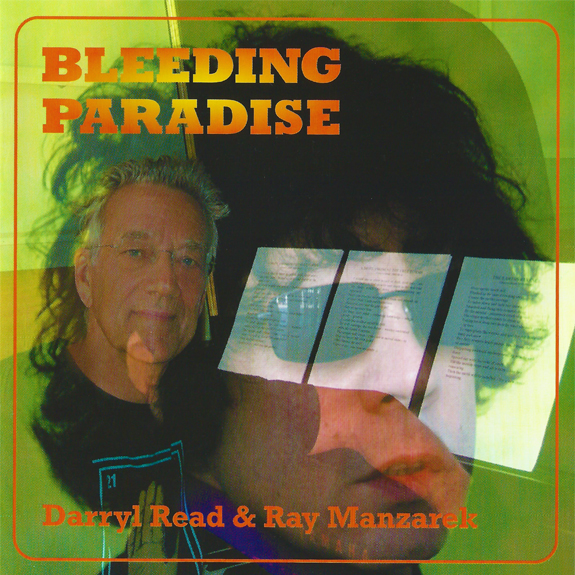 Comes with 18 page booklet with lyrics and photos of session. CD also contains a 20 minute video of Ray and Darryl in the studio.

Music available on iTunes and Amazon.com. 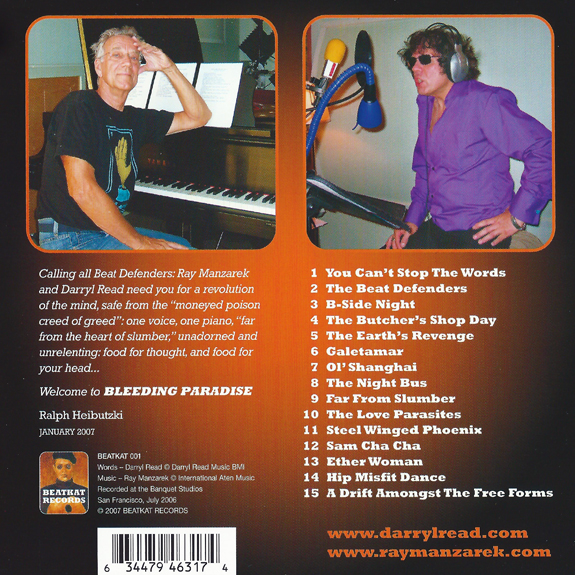 This is the final release coming out of Ray’s collaboration with his friend, UK poet and punk-rocker Darryl Read. Ray improvises classical piano behind Darryl’s words and it truly works; from bluesy boogie-woogie to beautiful classical melodies, it really showcases Ray’s range of skills. The production quality of this release is top notch putting you right in the room with Ray and Darryl. This is truly an enjoyable listen. On top of that, this was released on multi-format media CD/DVD and includes a 20 minute video of Ray and Darryl recording different takes of “The Butcher’s Shop Day”, “Ol’ Shanghai” and “The Love Parasites” in the studio. Although these are essentially “blair witch”-type home movies filmed by the studio engineer, it is amazing to watch Ray and Darryl at work, like a fly on the wall in the studio. This video footage alone makes this release well worth tracking down.

It was obvious that Darryl truly enjoyed working with Ray, and Darryl was one of the most genuine and sincere rockers I’ve ever met. Based on conversations with both Ray and Darryl, I can say that they were true friends and had a genuine respect for each other. Below is the message that Darryl posted on Ray’s Facebook page the day after Ray passed away. Sadly, Darryl also passed away in 2013, almost a month to the day after writing the below message.

To My Friend Ray Manzarek, by Darryl Read

The bad news that my great friend Ray Manzarek died on Monday 20th May 2013, came to me here via Facebook this morning – Tuesday in Siam, from my friends and fans, when I switched on my computer.

I can tell you that I am devastated! I thought of calling Ray all through last week and was going to call him over the weekend, and decided, I would call him from here in Siam this week when I got in town. The last time we talked – I was saying that I would like to work with Ty Dennis and Phil Chen on some Rock shows etc – when they weren’t working with Krieger/Manzarek band, which Ray thought was a cool idea.

I had known Ray since early 1981 when I met him in Hollywood, and had remained close friends with him. During that friendship we made three albums together: Beat Existentialist (1990), Freshly Dug (2000), and Bleeding Paradise (2007). Ray was one of the few people who helped me in my career, and was loyal to the maximum! On many occasions – he would put people in their place if they tried to put me down – if we were hanging out – or working together. Ray never left me out of anything going on. As an example in 2006: he made the whole crew and tour bus wait for me, whilst I got my bags and went down to Paris with the band – after a quick decision to go with the Krieger/Manzarek outfit from Frankfurt.

Many stories and many cool times I spent with Ray, he also got me into writing poetry – and encouraged many aspects of my Rock career over the years. We were on the same wavelength as friends and as musicians. When we made the Bleeding Paradise album in San Francisco in 2007 – the production people in the studio, said they thought we were so tight musically, and asked how long we’d been rehearsing, Ray said: “Well he’s good and I’m good – we are just throwing it down now.” We had almost a telepathic connection music-wise, and were doing the cuts in one takes – faultlessly, and further more second back up takes – the same! His music to my poetry – was supreme. And what was cool; was English poetry, alongside the greatest Rock keyboardist in history. With no Morrison tribute stuff. It was all new and original!

I am so very sad, as if only I had made that call to Ray, in the last weeks, I would have felt better. But no chance to say goodbye. I always thought of Ray of being there, as he was the many times when I called him. In a way; not saying goodbye is good – because I will always think of him as being there. His music lives on forever, as does his soul!

The old man of jazz full of tom – sparse – brass and snake hips
We once spoke in close-note-contact
His face gaunt and of chemical impact – to file and fuse the bread – lead – doctors in floodlit death and C’abria D’oro
Sluice – Outed the vermin crowds of smart flaked impostors – his road was of jagged truth and genius hoof
Blazed and dry the jazz world cried
Many would feel his ghost as they sprung be-bop cool notes
Interwoven in the beads of eternal fires inside the chosen spokes!