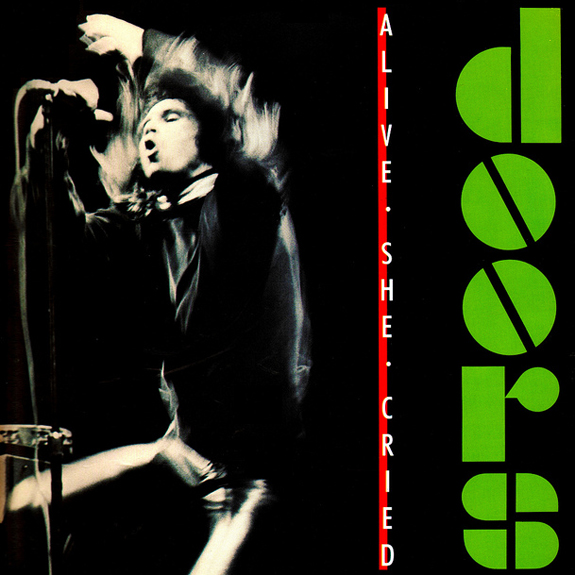 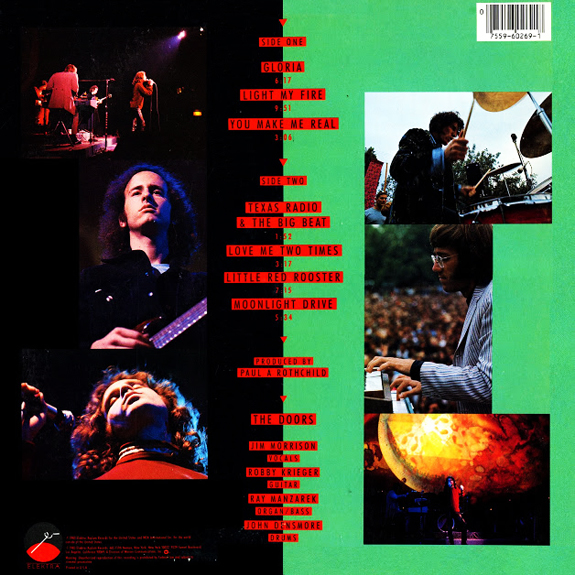 Gloria
Light My Fire
You Make Me Real

It had been a long Monday afternoon for the Doors, stranded backstage at the Aquarius Theatre in Hollywood, waiting for something to happen. Scheduled to take temporary possession of the hall from the long-running hippie entertainment Hair, their intimate one-nighter was actually an important test run for a projected series of concert recordings. But it was a full hour past the agreed takeover time, and the Hair crew still weren’t moving their silly plastic props and staging quickly enough. The Doors were left to . . . . wait around . . . .

That there were four Doors taking part in the tedium was something of an amazement. Soundchecks had never been of much concern to Jim Morrison, who was usually elsewhere until minutes before showtime. He was, however, taking the occasion of this first live Doors recording very seriously. He had turned up at the theater early, bearded and energized, ready to have at it.

This feeling was shared by Robby Krieger, John Densmore and Ray Manzarek. The wanted it. After all the politics. The controversy and concert cancellations that had eaten up the better part of 1969, the quartet itched to play some music. When the changeover was finally complete and the band’s equipment in place, these tensions dissolved. The singer shouted for “Gloria” and they were off.

The Van Morrison classic was one of the first songs the band had worked up as they invented themselves in a makeshift Venice rehearsal room, and a presence that would snake through their entire history. They used it to flesh out their earliest sets, jamming on it with Van himself when the Doors opened for his group ‘Them’ at the Whisky A Go Go. It was central to the late 1966 performances at the New York club Ondine that helped win the band its influential East Coast following, and a song they would continue to call upon every so often until their final shows in 1971.

Always mood elevation for audiences, on this occasion in an empty hall, “Gloria” was a pure release for the band. Jim was relaxed and playful, his voice rested and strong. Free of the expectations of his audience, for a few precious minutes he succeeded in ditching the Lizard King. Here was another side of the Doors; celebrating the endurance of the simple urge to rock.

That Aquarius soundcheck was among a host of live Doors tapes that vanished sometime in the 70’s and were feared to be lost forever. This was a severe blow, as there was never much in the way of unreleased material to begin with. The Doors fashioned their remarkable achievement in a career brief even by rock & roll standards. Their six studio albums in five years toured a course of changes that would have been intense given a full decade. In this acceleration there was little waste and almost nothing left over.

The first signal that the missing tape situation was not without hope came when a videotape of a 1968, Danish television performance surfaced. Among the selections was a union of “Texas Radio & the Big Beat” and “Love Me Two Times”. Not only was this a unique coupling (“Texas Radio” would not officially show up until two years later on L.A. Woman), it was clearly of release quality.

This unexpected discovery sparked the Doors’ enthusiasm, and they resolved to mount a search for the rest of the tapes. Assisted by longtime producer Paul Rothchild, they spent many months exhaustively investigating every possible lead. The effort generated only frustration until they stumbled upon a scrap of paper in an unused desk at a Los Angeles storage facility, indicating that an unspecified shipment had been received but never logged in. Tallied with the existing information, this proved to be the missing piece of the puzzle. The year-long hunt was brought to conclusion in a matter of hours.

In reviewing these tapes, the band and Rothchild followed two basic criteria beyond the obvious musical considerations. The first was that they would not repeat any of the titles from Absolutely Live, no matter how different the version. The second was that, as the recovered tapes spanned a three-year period, they would attempt to assemble a correspondingly broad overview of the Doors’ capabilities.

So you have the exhilaration of the soundcheck “Gloria,” and the rock-hard economy of “You Make Me Real” and “Love Me Two Times.” The extended “Light My Fire” demonstrated how impressively these musicians could solo, but more importantly how supremely well they played together, the shared circuitry at the heart of the Doors’ timeless hoodoo. “Moonlight Drive” was among the first original songs concocted by the band, and this version is distinguished by the unexpected incorporation of a syncopated “Horse Latitudes.” “Latitudes,” “Texas Radio” and the inclusion of the “Graveyard Poem” in “Light My Fire” are applications of Morrison’s poetic consciousness as a means of keeping older material internally fresh. “Little Red Rooster,” with an assist from John Sebastian on harp, points to the twisted country blues that became an increasing concern in their final days.

No record album can ever fully reproduce the magic of a live concert. These live Doors performances, however, document moments when that magic was present. And the presence continues to be felt. Kids in garages and basements everywhere still learn how to rock by hammering out homemade versions of “Gloria” and “Light My Fire”. Let it roll.
Benjamin Edmonds
August, 1983

“Alive She Cried” was the first official live release since 1970’s “Absolutely Live”. With the 1980 release of the Morrison bio “No One Here Get’s Out Alive” along with a new “Greatest Hits”, the fans were hungry for new material. This was it. Although this is all live material, each song was heavily edited by Paul Rothchild, with new overdubs added to some of the songs. The source material comes from the Aquarius Theater, Felt Forum, Detroit and Boston shows. Fans would later get to hear the original source material when Bright Midnight Records (and later Bright Midnight Archives) released all of the original concerts unedited. They would also discover that although the version of “Little Red Rooster” on ‘Alive She Cried’ was credited to being from the Detroit show, it was actually from one of the New York Felt Forum shows. This release was discontinued after the Doors released the “In Concert” double CD in 1991 which contained all of the songs from this release.